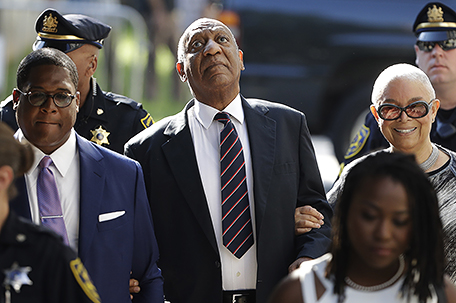 While arguments in the case of The Commonwealth vs. William H. Cosby has wrapped up, the comedian’s fate is still up in the air.

This week, the case of The Commonwealth vs. William H. Cosby went to the jury deciding his fate in the Montgomery County Courthouse in Norristown.

And as of press time, it’s still there.

Cosby is charged with committing aggressive indecent sexual assault and related offenses against former Temple University employee Andrea Constand in his Cheltenham Township home in 2004. Should he be convicted on all of the charges, the 79-year-old comedian and creator of the iconic 80s sitcom “The Cosby Show” faces 30 years in jail.

As the jury ended deliberations on Wednesday night, the seven men and four women from Allegheny County charged with deciding Cosby’s fate showed signs of wear.

“This is an incredible jury that has just acted with incredible dignity and fidelity,” O’Neill said before sending them back to their hotel for the night. “You have taken your task so seriously…”

Since beginning deliberations at 5 p.m. on Monday, the jury has asked to either review or have read to them, several pieces of testimony including a police report detailing the kinds of pills Cosby is alleged to have given Constand, a chunk from Constand’s nearly eight hours of testimony, the report from the Durham Police in Canada, and the interview that Cosby did with Cheltenham Police.

Jurors also asked for clarification of the phrase “without her knowledge” when it comes to an element of the third count, lack of consent.

The jury has had to take in a lot since Monday, the least of which was Cosby’s defense.

Defense attorney Brian McMonagle’s entire case consisted of bringing Cheltenham Township Det. Richard Schaffer, the detective who took Cosby’s statement, and asking him to verify what he wrote in his reports.

It took all of six minutes.

But it wouldn’t have if Judge O’Neill had allowed the testimony of Marguerite Jackson, a student adviser at Temple who traveled with the school’s women’s basketball team while Constand was its director of basketball operations.

In a statement read by Cosby spokesman Andrew Wyatt, Jackson claimed that she and Constand were watching television when a story about a woman being allegedly drugged and sexually assaulted by a high-profile person came on.

When Constand told Jackson that something related had happened to her, Jackson claimed that she intended to file a lawsuit and get money for school rather than file criminal charges, according to Jackson’s statement.

Judge O’Neill refused to admit the evidence, much to the chagrin of Wyatt, who instead read Jackson’s statement on the steps of the Montgomery County Courthouse.

Cosby’s wife Camille made her first visit to the courtroom on Monday and was treated to McMonagle’s two-and-a-half hour closing argument.

“This was a relationship,” he said. “They were intimate. Why not just call it what it was? You have to stop this. Don’t lose your common sense. If you have more questions than you do answers, you have to acquit!”

But Montgomery County District Attorney Kevin Steele disputed McMonagle’s contention. He told the jury that the reason they were there is because it’s kind of hard to consent to sexual activity when your incapacitated.

“If you have sexual relations with someone when they’re asleep, that’s a crime,” Steele said. “They’re not consenting. They’re not capable of consent.”

While the jury has been busily trying to make a decision, the area surrounding the Montgomery County Courthouse has taken on a bit of a circus atmosphere.

From the man who brought his favorite comfy chair to sit in as he waited for the verdict, to the man who shouts out “Hey! Hey! Hey!” to Cosby as he enters the courthouse every morning, to the woman shouting “We’ve already won!” while driving a U-Haul truck with an anti-sexual assault message, there’s plenty for the myriad of news organizations covering the trial to see.

A group comprised of some of the other women claiming they were sexually assaulted by Cosby has also been in attendance, as were many of the lawyers representing them in civil suits.

To get the latest information on the Cosby Trial, check www.philasun.com for updates.