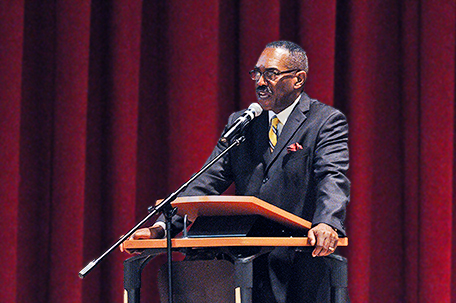 No one could blame Minister Rodney Muhammad, president of the Philadelphia NAACP, if he felt a little concerned as he prepared to go to the national organization’s annual convention in Baltimore.

Right now, as the nation’s oldest civil right organization heads to Baltimore for it’s first convention of the Trump Era, the NAACP is at a bit of a crossroads.

Leon Russell and Derrick Johnson, the organization’s chair and co-chair, are about to go on a nationwide “listening tour” to find out what issues local chapters find important and for help in determining what the future of the organization looks like.

That became necessary after NAACP leadership decided not to renew the contact of Cornell Brooks, the organization’s President and CEO.

That decision led to a very public excoriation from the Council of Bishops of the A.M.E. Church.

“The Board’s recent decision not to renew the services of Rev. Cornell Brooks heightens the need and urgency for the NAACP to define why it should continue to exist,” the letter said. “The NAACP boasts that it is the oldest civil rights organization in the country. While this is true and ought to make us proud, longevity alone is not proof of relevance. For the reality is that today the NAACP is smaller and less influential than it has ever been in its history as an organization.”

While he doesn’t think that the NAACP should go by the wayside, Muhammad believes that it might be time for the organization to do some soul searching, he said.

“I hope [a discussion of the future] comes up,” he said. “We need to look at anything that has been around for 108 years, whether it’s a church, a social club or any other organization. I’m glad that we’re having a listening tour so that our leaders can hear what it needs to do to be more effective from the people in its branches. We can’t get bogged down in bureaucracy.”

Nearly 8,000 people from around the world will gather at the Baltimore Convention for the NAACP’s 108th convention. A wide range of issues raging from education to criminal justice to healthcare will be discussed.

Politicos ranging from Sen. Kamala Harris (D-CA) to former Attormey Gen. Eric Holder will be speaking to the delegates throughout the week.

But while there will be a lot of politicos there, the one that will most likely be the subject of most of the discussion at the conference won’t be. President Donald Trump was invited, but has refused to come, continuing a tradition of Republican presidents who have decided to ignore the organization.

It might be just as well, considering that a strategy designed to control the President’s baser instincts, instincts that have included such things as Muslim travel bans and scrapping the Affordable Care Act, will be the subject of much discussion, said Rochelle Bilal, secretary of the Philadelphia NAACP.

Part of that forward movement will be showcased at the ACT-SO competition, which begins prior to the convention on Friday. The Philadelphia chapter is sending seven students to compete in eight categories, including a student whose device designed to track lost children is entered in two engineering related categories, said Kay Coleman, the Philadelphia NAACP’s longtime ACT-SO coordinator.

“We have some very good kids going this year, and we’re hoping to bring home some medals,” she said.

The NAACP convention begins on Saturday and continues through July 26.