The SUN Celebrates the Life of KeVen D. Parker 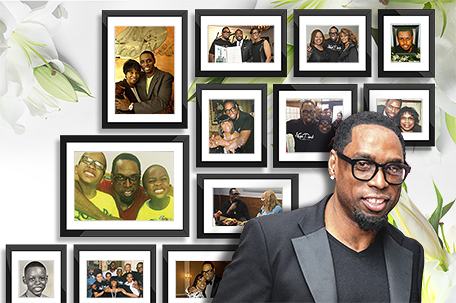 Keven Duval Parker, was born on May 3, 1963 in Philadelphia, Pennsylvania. He was the youngest child born to the late Joyce Parker who preceded him in death.

On January 14, 2021- the world lost an extraordinary man; Keven gained his Crown of Glory in Heaven.

Keven accepted Christ at an early age and attended the family church. As an adult, he worshipped and became active at the Baptist Worship Center in Philadelphia. Keven often attributed prayer and his strong faith as one of the reasons for his success.

As a young child, Keven would observe and often help his loving mother, as she prepared her neighborhood-famous southern cuisines. His mother Joyce would patiently explain the ingredients that were necessary in creating her special dishes.

Keven learned from his mother and now we can look forward to enjoying this cuisine especially at Ms.Tootsies RBL, which was named after his dear mother for her well known love for Tootsie Rolls.

Keven had an excellent work ethic that was second to none. He worked in various administrative management functions throughout his career.

Keven enjoyed working in the banking industry, for the Roberts Family at the Comcast Corporation, and especially for former Mayor John Street, during his career.

However, Keven uniquely enjoyed building, owning and growing all of his own successful businesses as an entrepreneur. He was a self-made, hard working, passionately dedicated human being, with a unique and rare vision.

Keven’s commitment and attention to detail was unmatched. He wanted to always create an excellent experience for ‘His’ customers.

Those customers would grow to be local Philadelphia dignitaries, out of towners, and celebrities. Folks would travel to Philadelphia to dine at one of Keven’s locations. Former President Bill Clinton, Oprah Winfrey, Philly’s own Will Smith and James Lassiter and Mo’Nique as well as his special Godmother Patti Labelle — all enjoyed Keven’s award winning cuisines and experiences throughout the years.

Creating, planning and executing events was also a special gift that Keven shared with his clients. For more than twenty years, under the leadership of J. Whyatt Mondesire, Keven planned and executed the N.A.A.C.P. Annual Gala. Keven was also responsible for producing the Inaugural Ball for former Mayor John Street as well as other major events around the City of Philadelphia.

If you walked into a Keven Parker & Company event, you would surely be ‘wowed’ and impressed.

Keven was a caring and compassionate person who not only took pride in building his brands, but he was also committed to giving back to his community. Keven’s greatest gift was his love for people.

He dedicated a great deal of his time and resources to helping young people, single mothers, and basically anyone in need.

After his mother’s death, Keven launched the “Spreading the Love” campaign in which he traveled to various neighborhood supermarkets and paid the grocery bills of random people who needed support.

Keven would also donate meals to the shelters, churches, and other non-profit organizations that needed assistance.