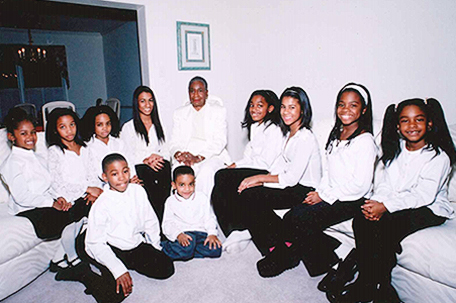 Grandparents Day is a special day to honor grandparents, which President Jimmy Carter started in 1978, designating the first Sunday after Labor Day as National Grandparents Day. Although it’s only recognized as one day, we want to spend the entire month of September honoring grandparents and their legacies.

The purpose of the holiday is clear: “To honor grandparents, to give grandparents an opportunity to show love for their grandchildren, and to help children become aware of the strength, information and guidance older people have to offer.”

Although Grandparents Day doesn’t typically receive the attention of Mother’s Day or Father’s Day, it is a national acknowledgement of grandparents contributions.

For many of us, we celebrate by buying our grandparents a card or flowers, if they’re still alive. But for today’s generation, especially in the African American community, the honor of the position of grandparents, especially grandmothers, has somewhat declined over recent years. Whether you blame the increase in teen pregnancy which means grandmothers are now much younger than in generations past, or other socio-economic disparities, the decline in the role of grandparents has had a huge impact on our communities.

Very seldom do we hear stories today of matriarchs who hold their families together with grit and love.  Which is why we want to celebrate some of the amazing grandparents in the area. Grandparents like Sadie Reynolds, who moved to Philadelphia from South Carolina after her husband died, and went on to raise seven successful children.

Reynolds is the mother of Philadelphia City Councilwoman Blondell Reynolds-Brown. Reynolds-Brown, who is the oldest of the seven children, recalls life after her father passing away when was just 16-years old.

“At 37-years old, my mother was a widow and a single mother of seven.”

Reynolds moved to Philadelphia with her children, and although she had already earned a Bachelor’s Degree, upon arrival in Philly, she was told that her credentials were not sufficient to teach in the Commonwealth, so she returned to school until she satisfied the requirements to be able to teach. She supplemented the family income by cleaning homes on the weekends, bringing Blondell along to help. “My siblings didn’t even know until recently that I went with our mother to clean floors on Saturdays, because hard work was just something we did. Our mother didn’t let us sleep in late on Saturdays, we had to be up at 6 AM. She told us to ‘act like we had jobs.’”

Being the oldest also meant that Reynolds expected Blondell to help her younger siblings complete high school and college after she completed her education. “I accepted a job with the Peace Corps after graduation, and called home to tell my mother. There was dead silence on the phone. I knew what that meant. She told me that my Peace Corps would be right here in Philadelphia.”

Not only did each of Reynolds-Brown’s siblings go on to earn a Bachelor’s degree, several of them also hold advanced degrees. And of Reynold’s 10 grandchildren, nine have either graduated or are currently in college, which includes Syracuse, Cornell, Princeton, Duke, and Temple University. The remaining grandchild is a currently a senior in high school.

The beauty of Reynold’s legacy is that her grandchildren feel compelled to continue it.  “It’s like we have to uphold that for her”, said Brielle Brown, whose currently studying  at Syracuse. Brielle’s bond with her “Nana” as she affectionately calls her, is a little closer than the bond of the other grandchildren, because Brielle grew up living with her grandmother. “She’s 88 now, and sometimes when I have to do things for her, like make her breakfast, or get her up for a walk, it makes me remember and appreciate even more all the things she did for me when I was younger.”

Sadie, one of 16 children, is still very much alert and active, and up until her 80th birthday, she maintained her family’s 100 acres of land in South Carolina.

“Nothing good or bad lasts forever”, is a messages both her children and grandchildren fondly recall receiving from Sadie.

“Whether things were going really great, or I was disappointed about something”, said Brielle, “she always reminded me of this. She is the root of our family. She is the glue that holds us together.”

Even though Grandparents Day has passed, its not to late to appreciate and honor your grandparents. Go to our Facebook page and share a fond memory and photo of your grandparent. We’ll randomly select a few to include in next week’s edition of the Philadelphia Sunday SUN.