The Stripper vs The Elder 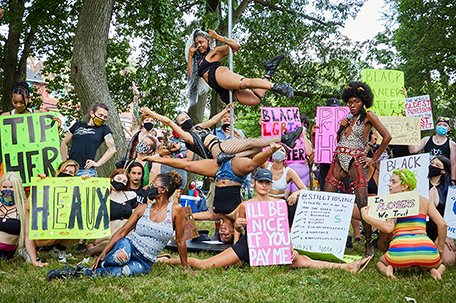 Fact:  On June 27 and July 25, a  group of exotic dancers (also known as strippers), gathered in Malcolm X Park at 52nd and Larchwood Avenue, for what they called a “Strippers Strike.”

Fact: This “Strippers Strike” event took place at 12 noon, during a time when children were in the park playing.

Fact: Their post on social media (Instagram) to promote the event said, “Bring tips. We have poles. Donation requirements for all men.”

Fact: Due to the coronavirus, all strip clubs are supposed to be shut down in Pennsylvania. That means the women and men who dance in these types of establishments have not worked in months.

Bammrose is the stage name of a young woman in her mid-twenties who has founded a group called Stilettos, Inc., created especially to support and speak up on behalf of people who work in the sex industry as exotic dancers.

“White-owned urban strip clubs are drains on the Black community,” she said. “They profit off of Black dancers, customers and staff. Meanwhile urban schools look like sh*t. Ask yourselves, what did my club do for me during COVID-19? What has my club done in support of Black Lives Matter that they profit off of? How many Black women has my club hired? Urban and Black clubs owned by non-Black people are a problem. White clubs and non-urban clubs that refuse to hire Black women are a problem. The sexual harassment found in all clubs is a problem. Dancing is legal. We deserve the same professionalism as any other industry. We deserve equal opportunities to work wherever, based on talent and not race or what our natural hair looks like. These clubs don’t care about us as Black people, as women or as professionals. I am retiring from dancing in clubs to take on activism full time. I will be calling out these clubs on their racism and sketchy policies. I will be holding them to a higher standard, educating and unifying dancers and offering aid to dancers that need it.”

Articulate and calm, Bammrose shared that to educate the general public about what is happening in a lot of strip clubs across Philadelphia, they felt the need to come to a place where they’d get attention. To hold a demonstration outside in front of a strip club right now, she said, just wouldn’t make sense because the strip clubs are still closed because of COVID-19.

“I have been told by some of my associates who are strippers that they are still working in some clubs where owners are defying the law and operating, business as usual,” she said. The most unfortunate part of that is that the dancers are working without masks and the customers sitting in these illegally opened clubs aren’t wearing masks either. The club owners are demonstrating how little they think of their dancers, putting them in harms way, healthwise.”

Elder Kim Fuller, who lives in the community and who is one of the administrators at a charter school across the street from Malcolm X Park, was alerted by a friend who saw the Strippers Strike event as it was unfolding. That friend sent her a text and a couple pictures of what was happening, which made Fuller get over to the park as quickly as she could. But by the time she arrived, the event was over and the tent that had been set up for the dancers, the poles and all that stuff were being packed into several vehicles.

“Not knowing what I might come up against, I just took note of the contact information on a flyer about the event, and I reached out to the founder of Stiletto Inc, Bammrose, so we could have a conversation in person,” Fuller said. “Again, not knowing what I might face, yes I did ask some people from the community to join me at Malcolm X Park on the day and time I planned to meet with Bammrose and whomever she might have with her.”

“They seemed to think that I was challenging them morally, and I wasn’t,” Fuller explained. “I read an article about them that was published in Philadelphia Weekly newspaper and the article was good. The article really said that they were not being treated right in strip clubs. They were being harassed. They were being cheated. They were being charged for things they shouldn’t be charged for.  I said to myself, they’ve got some legitimate issues.  But keep in mind, the way Stilettos, Inc. promoted their event in Malcolm X Park, they promoted it as a protest to keep everything legal. That is the key word that they used — “protest” — to keep everybody off of them legally. I challenged the fact that it was a protest. I said, if you’re protesting, then why do you have signs that say, “Pay me and I’ll be nice to you?” I asked the question, if you say you’re protesting, why in Malcolm X Park, or in any park in the city because children are here. My issue is not what you do, nor how you do it. My issue is that you’re doing it in a family park. Everybody doesn’t want their children exposed to this type of entertainment.”

Fuller charges that in her opinion, Bammrose and those who were with her when they met face to face, did not deal with the subject at hand.

“They told me I put their lives at danger, “ Fuller said. “They said that I said a lot of things that I did not say. I reminded them that we needed to stay on topic. I told them I didn’t care that they’re strippers. I told them I thought people should have fair treatment wherever you work.  The bottom line for me is that this is not about where you work. This is about bringing your concerns to a public forum where children are.”

Fuller also noted that she invited City Councilwoman Jamie Gauthier and Committeeman Greg Spearman to join her in the park when she met with members of Stiletto Inc, but they were no shows.

These following comments were posted on Facebook about the strippers protesting, fundraising and dancing on poles at Malcolm X Park in broad daylight. The feedback was mixed.

“You are playing into the stereotype of Black women being “Jezebels,” one post read. “These are well rounded, intelligent, hard-working individuals, not just performers.”

“I support this movement,” another supporter posted. “As a former dancer, I know all to well the sexism that exist within the industry and the lack of financial protection and healthcare. Do y’all thing. When’s the next one?”

Others expressed opposition to the event.

“Kim I agree with you,” one poster wrote. “Malcolm X Park is not the damn place to have it. Have it in front of the strip clubs that you work at to draw the attention there. If they don’t like the way they’re treated, why don’t they put their money together and open one?”

“They need to relocate somewhere where there are no children,” someone else posted. “This is a family park.”

“Completely disrespectful to the children and adults,” yet another person posted.

In both instances, when Stilettos, Inc. hosted their “Strippers Strike” event in Malcolm X Park, none of them were completely naked. Some of the dancers had on a bit more clothing than others. Some did have much of their butts exposed, as they were wearing G-strings, not panties.

“It was a lot to see in the middle of the day in a family park,” one neighbor commented, who did not wish to be identified.

As I interviewed Bammrose, she reminded me that the late Maya Angelou, famed author and poet, was once a sex worker. She worked as a prostitute for a period in her life and as a female pimp, which she chronicled in her 1974 memoir, “Gather Together in My Name.” She reminded me that Malcolm X was once a pimp before he turned his life around, and that internationally famous Black performer Josephine Baker was considered an exotic dancer or stripper by many in her heyday from the 1930s through the 50s.

There’s many stories about young women and men who become dancers to pay their way through college or law school, Bammrose said. As she put it, “Sex workers can become great people, too.”

The question remains, however, should strippers be performing pole dances and having money thrown at their feet at Malcolm X Park, while they are at the same time holding protests against ill-treatment at strip clubs?  Bammrose says they’ll be back again.

Feds to review cases into hanging deaths of 2 Black men