The Stamp of Approval 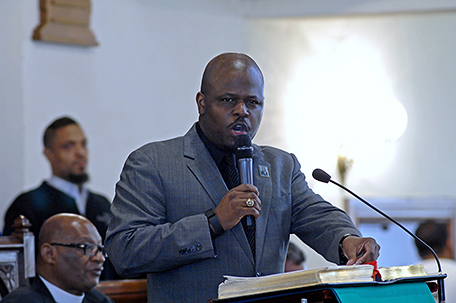 African Methodist Episcopal church members from around the country filed into the denomination’s mother church to celebrate the unveiling of founder Richard Allen’s United States Postal Stamp on Tuesday.

The Mother Bethel AME Church, located at Sixth and Lombard Streets in South Philadelphia, was filled with members and stamp collectors alike there to celebrate, and purchase, the new stamp, the 40th member of the USPS’s Black Heritage Series. 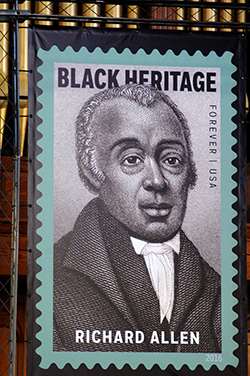 Mayor Jim Kenney was among those speaking at the gathering. He applauded the chance to talk about Allen, his achievements, and the prominence they should have in our historical discourse.

Since Allen’s legacy wasn’t as clear cut as the legacies of others who have been immortalized on the Black Heritage Stamps, the Postal Service had to do some research on him, said Joshua Colin, Vice President for Area Operations for the Postal Service’s Eastern Area.

After the research, however, Allen’s inclusion was obvious, Colin said.

“He was the Martin Luther King of his age,” he said. “He bought his freedom when he was 20. He founded the AME church. He stood for something. It was an honor to do this

While it was a crowning achievement for everyone in the room, it meant more than that to Richard Lawrence. Lawrence, an eighth generation descendent of Richard Allen, spoke at the commemoration and called on the audience to build on the social justice work of his ancestor by working toward criminal justice reform, true equality, and the end of racism.

He also took a moment to reflect on what this memoriam to Allen meant to those who followed his footsteps.

“This is a great moment to honor his work and legacy,” Lawrence said. “I’m hoping that this will be a chance to learn about the AME church and it’ll lead to the opportunity to develop leaders.”

The Richard Allen Forever Stamp can be purchased at your local post office.