The sights and sounds of West Philly Porchfest 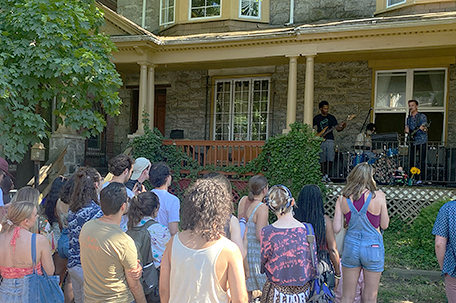 ABOVE PHOTO: Many crowds just like this added up to thousands of Porchfest attendees.  (Photos by Mac Johnson)

If you happened to drive through West Philly on June 4, you may have noticed the not-so-faint sound of live music or the eclectic crowds there to take in every note. You may have seen the bodies moving in and out of rhythm to the beat of 100 drums. You may have noticed the smiles, the laughter, and the joy — but if nothing else, you were seeing the community of West Philadelphia come alive in its own unique and unmatched way.

Organizers of West Philly Porchfest call it an “organic, do-it-yourself music festival.” I tend to think of it more as a curbside Coachella where your only admission is how many steps you’re willing to take in the sun.

The collective of concerts took place on porches spanning from as far west as 54th Street all the way to 40th Street. Willing participants set the stage for performers by offering their porches,  power and peace and quiet for the day.

Joe Devitas is one of only three organizers and nine volunteers for the entire event.

“People talk about it like it’s a singular event,” he said . “It’s 130 different events and everyone is responsible for their own.”

In fact, Devitas says more than 130 porches were transformed into entertainment venues, 305 different groups performed and that tens of thousands of people pounded the pavement in search of a show.

Devitas says the beauty of Porchfest is getting people out of their homes and into the community around them.

“I drive the same route home, to pick up my child and go to the same park,” Devitas said. “Just being able to stop and pause for a day and be a part of the neighborhood makes all the difference.”

From solo acts to bigger bands with half a dozen people, Porchfest blends genres just as well as it blends generations.

“Porchfest is about strengthening the bonds of the community,” said Eliot Duhan, lead singer for one of the more popular acts, a band named EDO. “You get to meet people you wouldn’t otherwise get to meet, get to know their names and see them in a good circumstance.”

Duhan’s band has been playing together since 1987. Their energy was contagious as newfound fans stood shoulder to shoulder to listen to them sing about “Upper Darby giving them the creeps because it’s filled with freaks.” Regardless of the content found in Duhan’s lyrics, the concept of community was one idea he held dear.

“What makes the neighborhood strong is people getting to know each other’s names and faces,” he said. “Everything that gets people out of the house is good.”

Porchfest even pulled in people who were foreign to West Philly. I crossed paths with a young woman named Aidan McLaughlin who had just moved to Philadelphia after long stints in London and Chicago. It didn’t take her long to feel West Philly’s warm embrace.

“This is really my first time experiencing what a community can be, and it’s just a great experience,” McLaughlin said. “Philly is a city of neighborhoods, and I feel the togetherness more here than in any other places I’ve lived and visited.”

The day was also a boost for vendors and small businesses in the area. Restaurants and bars left doors wide open to take in fresh air and eager customers in need of refreshment. Some vendors with no more than a table and a few products for sale were delighted by the heavy foot traffic and extra attention.

The experience was more than just about the music, the same way that the diversity extended beyond the colorful faces of concertgoers. From the Tyehimba African Drum and Dance Ensemble to bands like Guachinangos that transported concert goers with blends of rich Latin styles like cumbia, Son Jarocho and Klezmer, the festival offered an exciting experience for all tastes. From DJs to comedians, to aspiring rappers searching for a platform, all pathways crossed on the porch.

Pockets of bliss seemed to overflow at various parts of the concert grounds. In a search for shade, I met Ali Richardson. Richardson told me he lived in Philadelphia for 20 years and that this was his second year playing at Porchfest. He is an educator, a mentor, a family man and top-notch musician.

I could’ve listened to him croon as he strummed his guitar for hours, and some people did just that. When he took a break from his set that sounded like a harmony of jazz and reggae, I asked him about the other members of his band. He gave me the rundown of young musicians jamming with him. They ranged in age from 8 to 12 years old. Richardson says the festival was an opportunity for the students to get hands on learning.

“It’s important to get my students a real-life opportunity to play in front of people,” he said . “We just want to bring the youth, elderly and families together to share music.”

Porchfest was truly a party for all ages. A party where hundreds of songs played all at once in what Stevie Wonder calls “the key of life.” As I walked to my car, I noticed another attraction not listed in the program, a sprinkler swaying from side to side in the middle of the street.

I watched as dozens of people ran up to it, contemplating their approach, then choosing to run through it. From toddlers questioning the world around them to adults finally unwinding from their work week, it brought cool relief on a warm day in June.

Porchfest bridged gaps between youth in their natural state of vitality and those wise from being weathered by life’s twists and turns. Together they twisted and turned to the sounds of West Philly’s ringtone, calling the community to come outside and play on the porch.

West Oak Lane Jazz and Arts Festival rocks Philly out with A+ entertainment!