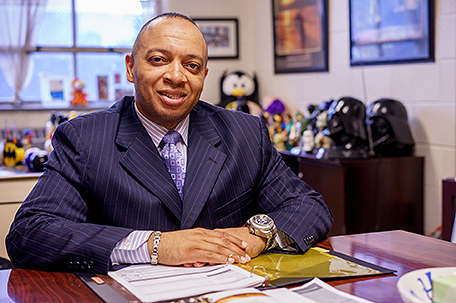 Initially, Gordon didn’t even want to be principal, and that he actually turned the job down twice, he said.

However, as fate and his journey would have it, he became a principal at several schools in the district, including Roberts Vaux High School in North Philadelphia, which closed in 2013.  His current school also faced possible closure in 2013, but was spared by the district.

Great things followed Gordon’s transfer to Paul Robeson High School in 2013 —  he has been selected as the 2021 National Association of Secondary School Principals (NASSP) National Principal of the Year.

U.S. News & World Report has recognized his school as “One of America’s Best High Schools in 2019.”

Gordon is taking to heart what his mother said to him — that his grandfather would be proud of him being a principal if he was living today — and also becomes only the second African-American to win the prestigious honor and the first-ever from Philadelphia.

Keith Newman, the dean of Students at Paul Robeson who nominated Gordon, credited his leadership through his great people skills and his ability to connect with his students.

“Besides the fact that it was about time that someone acknowledges what the man does,” Newman said. “So, when I found out that he was nominated for the state, I was ecstatic. When I nominated him for the NASSP National Principal of the Year, I submitted his name because I knew he was the winner.”

“I wanted the world to see what I saw,” Evans said. “I watched how he interacted with the students and how they interacted with staff. Everyone needs to see how he delegates to building and co-creates a learning environment that’s not just conducive to students but for all. I was so impressed and that’s what pushed me the most to put his application in.”

Gordon competed for the title in a field of 55 principals from around the country,  including candidates from the Department of Defense Education Activity, U.S. Department of State Office of Overseas Schools and the District of Columbia.

NASSP president Robert Motley was asked why Gordon was chosen for the honor in an article in Education Week Magazine. “Any school turnaround is hard and it takes a special leader to sustain it,” Motley said in a press release announcing the award in October. “But Mr. Gordon led Robeson High School’s turnaround under extraordinary political and social pressures, and at no point did he lose focus on the students. Under Mr. Gordon’s leadership, Robeson High School models what personalization was always meant to be. Personalization begins not at the data or at test targets, but at the person — with all their interests, needs, traumas and dreams. His leadership makes that happen.”

Gordon talked about his approach to addressing the whole student both in school and in their living environment and the concept of “Build Your Own Brand.”

“That’s one of the reasons why we continue to have minorities behind the eight ball when it comes to education, employment and the criminal justice system,” he continued. “What we decided to do here was to figure out what are the things here and the passion for our students and try to personalize our program to each individual student as best we can. So, we came up with the motto called “Build Your Own Brand.”

“I make it so that every student can visualize and share with us what their passions are,” he said. “It’s our responsibility to our programming to support that. So, we provide multiple outlets or avenues so that students can figure out their own individual pathways to their success.”

Gordon feels strong about the engagement of the community partners who also make a difference in his students’ lives. He cited the school’s partnership with the University of Pennsylvania’s Barbara and Edward Netter Center Community Partnerships and their programs.

“Having Penn tutors come and work in our classrooms and do classroom instruction as well [is key], because when I got there, I didn’t see a huge footprint of [the] University of Pennsylvania at the school, and I knew this would be important to our school and the students,” Gordon said. “So, when I reached out to the Netter Center, they were willing to correct this oversight.”

“We wanted to start to tap into some of the programs that they have there,”  he continued. “We wanted to create a culture for our students that would build around their strengths. Also, we wanted to tap into Penn to use some of their academic work that they were offering through their ABCS courses that Penn has to do as part of their community service and outreach to local schools.”

“So, they provide academic courses for kids to get college credits that are being taught by professors,” Gordon said. “They were able to work with the School District for additional high school credits that students can have on their transcripts. We also started mentorship programs through Penn.”

Gordon is a big part of the student’s success.

“He’s a person that pushes you to go where you want to go,” he said. “I’m now in my third year at East Stroudsburg as a biology major and hopefully going to medical school [to become] a bio-surgeon.”

“I came here and I fell in love,” said Lyric Wise, a senior at Paul Robeson, with a smile. “The whole environment is made like it is, is because Principal Gordon cares about us.”