The scales of justice… is it blind for some? 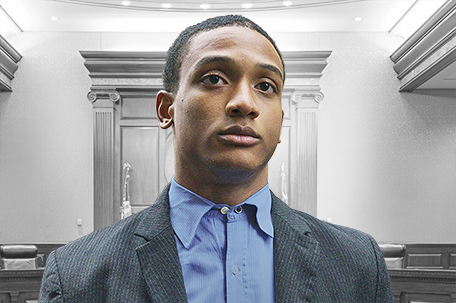 Before that fateful night in July 2018, Michael White was just another 20-year-old living in Philadelphia, attending college, and working part-time jobs to earn extra cash.

White  is a handsome young man, with eyes that have seen and experienced too much in his young life. And yet, after being found not guilty by a jury of his peers in the tragic death of developer Sean Schellinger,  his life seems to be going everywhere except back to normal.

Why is this you ask? It is simple, really. In a country where people of color are often portrayed as beasts of burden despite data to the contrary, it is beyond belief that this young man is innocent of a crime, while the deceased — who had a colorful history —  is being spoken of in recent media reports as being murdered and innocent in an altercation he himself had started.

Keir Bradford Grey — the chief public defender for the Defenders Association — is concerned, and rightly so, that Michael White is still being painted as a thug and murderer, and that members of the Schellinger family are on local and national news painting a picture that is missing obvious details.

White felt that Bradford Grey  “saw” him above the lawyers who were representing him. He felt that too many people viewed him as a hardened criminal, instead  of a young person who was at work and got caught up in a bad situation.

As horrible as the altercation was, White  maintained his innocence no matter what was said to him, and felt in his heart he would be okay in the end.

While many details during the case showed that Schellinger was no angel and caused quite a bit of trouble in his short life span, White was the one who was painted as the villain, despite solid evidence to the contrary.

That was just the beginning of a case where the impossible seemed to happen daily. Witnesses were flying in to testify, and the unfolding jury pool was almost miraculous in that there were six Black women on the jury.

“All I want is to be seen as a human  being,” White insists, and if he had had even one minor blemish on his record, he would not have gotten the benefit of the doubt, as society expects young people of color to be spotless, according to Bradford Grey.

For example: During the trial, the prosecution tried to use his words against him to prove that White was violent and wasn’t actually just defending himself. Were it not for witnesses like Professor, talk show host, and entrepreneur Mark Lamont Hill, witnesses who could help explain the Black aesthetic to the jury, things may have gone differently, Bradford Grey said.

“[White’s] words were used against him until witnesses like Marc Lamont Hill stepped in to testify about culture, and the varied meanings to words that are used in poetry, songs and just daily living,” Bradford Grey said. “Michael has the potential to add value to a community of young Black boys who are coming up and facing the same scrutiny and criticism. Their actions are deemed more culpable, and everything they do is [perceived to be] more aggressive. Children of color, and Black boys especially, are held more culpable and their actions deemed more aggressive than their White counterparts. We need to rebuke this notion that they are so much more pathological and aggressive and not worthy of being amongst us.”

White’s life is incredibly different from July 2018 and he is working to get his energy back. In order to survive this trial, he was literally floating emotionally above the fray in order to not drown in the waves of disdain, disbelief, and scorn aimed his way.

Since the trial, Bradford-Grey has found a passion for addressing the narratives in the justice world that allows people like White to be attacked, eaten up, found guilty and thrown away because they are almost always painted as angry, aggressive and hostile.

White feels that since the trial, he always has to be “perfect” and never make a mistake, which leaves him constantly checking himself because he is always in the public eye. He wants to be an average 22-year-old, and that has been taken away from him. In the midst of it all, he finds  inspiration in poetry and writes with intention as he takes it seriously.

So as White continues to navigate  a new normal, it appears that members of the Schellinger family are having a hard time accepting the court’s decisions, and have taken to doing interviews on news media outlets to share their anger and distress.

“Their privilege and power would not let them accept that the court did not side with them, and they were not used to that, because they had always been able to work the courts to side with their son. The breaks they got, Michael would have been in jail forever, if he did the things Sean did while living,” Bradford Grey said.

When asked to give examples of what she meant, Bradford Grey went on to recount that when Sean was about Michael’s current age, he crashed his brand new Mustang, and in trying not to make his parents aware, he decided that he would fix the car on his own, he decided to break into a drug dealer’s  house where he knew the people, and steal their money.

Unfortunately for Sean, he chose the wrong house to rob, and the people were home. They called the police who arrived and caught him in the basement with an expensive bottle of alcohol. Sean ran upstairs into arms of another police officer, who he tackled and they had to subdue him. After all of that, all he got in court was a diversion with no record.

Now, imagine a young man of color doing the same thing and use your imagination on how differently the scenario would have been.

Another account was given, where he was stopped in Montgomery county, they smelled marijuana on him, went to check his trunk, and found $65k in cash and marijuana. All he received was a traffic citation.

This is all public record, according to Bradford Grey.

In yet another instance, Schellinger went to a bar in Florida, refused to wear a shirt after being told several times he needed one on to stay in the establishment, and when told he had to leave, he went into a rage, threw punches, began choking the bounce, and bit the bouncer’s arm so hard that he was left with a permanent scar.

A couple of hours before that incident took place, he was in a local Wendys with his friends, got into an argument with one, head butted him, put him in a chokehold, and dragged his friend out the door by his neck while people tried to break it up to no avail.

These are the public incidents that were disclosed during the investigations at the trial, and one was left to imagine, what else was there about this young man that had a history of rage, overly consuming alcohol and drug use. His toxicology report at the time of death showed that he was above the legal alcohol limit and that drugs were in his system.

Given Sean Schellinger’s backstory , juxtaposed with Michael White’s, it is no wonder then that the murder charge was dropped and he was eventually not found guilty of Schellinger’s death.

So, if justice is fair and all things are equal, why is Michael White still being vilified and painted as a thug who needs to be imprisoned?

Who stands up for him, who has exhibited  none of these behaviors that would create a sordid past?

Why is he not allowed to be human and live?  Isn’t it awful enough that this tragic incident has left a stain in his memory forever?

As White continues to pick up the pieces of his life, he can only hope that he is surrounded by those who will help him to find a modicum of normalcy, give him the benefit of the doubt, and support his goals and dreams moving forward.