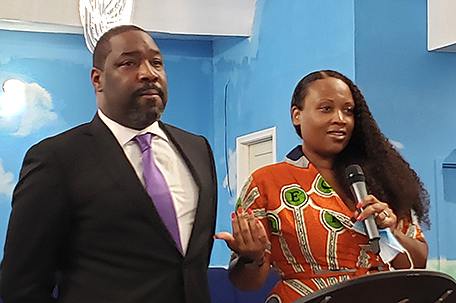 The only thing that was different in the retrial of City Councilmember Kenyatta Johnson and his wife, Dawn Chavous, was the jury.

ABOVE PHOTO: Johnson and Chavous speak to their supporters at a prayer service at Yesha Ministries Worship Center in Southwest Philadelphia prior to the trial. (Photo/Vincent Thompson)

Back in April, after the corruption trial of City Councilmember Kenyatta Johnson (D- 2nd Dist.), his wife, consultant Dawn Chavous, and former Universal Companies CEO Rahim Islam and CFO Shaheid Dewan, they walked out of the James Byrd Federal Courthouse at 7th and Market Streets due to a mistrial.

The federal government promised to retry the case, and that trial began this week in

Courtroom 9-B before Judge Gerald McHugh.

While the jury was different this time around — there are eight women, four men, and five alternates — the charges have not.

Johnson is accused of using his council office to help protect a group of dilapidated South Philadelphia properties, including the former Royal Theater site that was owned by Universal Companies — a non-profit formed by R&B legend Kenny Gamble — from being reclaimed by the City’s Redevelopment Authority. In exchange for that protection, Islam and Dewan allegedly gave Johnson a $66,750 bribe in the form of a “low-show” contract for Chavous.

It was necessary because misspending on the part of Islam and Dewan had led to cash flow problems for Universal, and they needed to make sure that the companies held on to those properties so that they could be sold and thus solve that problem, Assistant U.S. Attorney Thomas Gibson said in his opening argument.

“Whether the properties got developed or not, whether the schools did better or not, Islam and Dewan got paid despite their failures,” Gibson said. “As the failure caught up with them and was about to bring down their house of cards, they saw a lifeline by selling those properties. But they needed help. So, they acquired a city councilman by employing his wife.”

Islam’s attorney, David Laigaie disputed that, saying there was no need to bribe someone whose support you already had. Johnson had already helped Universal in the past, so he didn’t need a financial inducement for his support.

The insinuation that Chavous wasn’t a force in her own right and needed her husband’s assistance to find work angered the Pennsylvania chapter of the National Association for Women. Unlike some of the people accusing her, Chavous has the credentials and education to do the job for which she was being paid and had already established herself as a consultant in the education space prior to marrying Johnson, the letter said.

To assert anything else is sexist.

“Ms. Chavous has the relevant academic training and credentials to be an

effective consultant to clients such as Universal Companies,” said Nina Ahmad, president of Pennsylvania NOW. “It is noteworthy that Ms. Chavous had established her career long before she married Councilman Johnson. That there is an overlap of her client base with relationships that her husband has, a Philadelphia councilmember, is the reality of business in Philadelphia, where there still is a dearth of viable, established Black women-led businesses.

Prior to the trial, Johnson and Chavous were at the center of a victory prayer service at Yesha Ministries Worship Center in Southwest Philadelphia. Joined by Ahmad and many of Johnson’s colleagues past and present, more than 100 people came to the church to wish the couple well including: City Council President Darrell Clarke, Councilmembers Isaiah Thomas ( At-Large), Jamie Gauthier (D-3rd Dist.), Katherine Gilmore Richardson (At-Large), and State Sen. Anthony Williams (D- 8th Dist.). Former City Councilmember Jannie Blackwell and former City Council Majority Leader Cherelle Parker were also there.

In a statement posted on social media shortly before opening arguments, Johnson continued to assert his innocence.

“As my wife, Dawn Chavous, and I have said from the beginning of this process, we are innocent of all charges filed against us and we look forward to this second trial getting underway to clear our names,” the statement said. “Throughout this process, I have continued to represent the 160,000 residents in the Second Council District, which includes 15 neighborhoods in South Philadelphia, Southwest Philadelphia, and Center City, and I will continue to do so.”

The trial’s first witness was, as it was in the earlier trial, Tamillia Hinson-Threadgill, the current COO of Universal Community Homes and Kenny Gamble’s stepdaughter.

Jurors will be examining just the political corruption aspects of the case this time around. Islam and Dewan are facing another trial on 22 other counts including racketeering, tax fraud and embezzlement following this trial.

There was no testimony on Wednesday due to the Jewish Holy Day of Yom Kippur and court will be closed on Monday due to Indigenous People’s Day. The trial is expected to last a month.