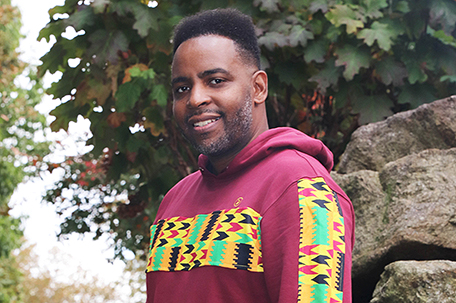 If you are a Philadelphia resident and are not familiar with the name Mister Mann Frisby, allow me to introduce to you a renaissance man who is an excellent writer, philanthropist, track coach, movie critic who professes a deep abiding love for a city that loves him back without reservation.

The first time I met Frisby, he was co-hosting an event with the Black Male Development Symposium led by Doreen Loury, Ph.D, associate professor, Arcadia University and the founder/executive director of the Symposium.  Slain teenager Trayvon Martin’s father Tracy was the featured guest.

The next time I encountered Frisby some weeks later, a large group of us were sitting at a movie premiere he hosted in Philadelphia, while his adorable mother passed around a pan of freshly baked cake that was still warm. The joy that emanated from Frisby as he serves others is palpable, and it was clear his mother, the late Joyce Poindexter, played a pivotal role in the man he was to become.

Frisby believes in college education at no cost where possible, and has groomed many athletes into becoming household names in their fields of endeavors in and beyond track and field.

In his own words, Frisby maintains that the annual Penn Relays held at Franklin Field in Philadelphia each year is his version of a highly anticipated awards show. He is well versed on international athletes who pose a threat to their American counterparts  and stays abreast of these details from around the world.

What is most appreciated, often revered and sometimes feared about Frisby is his unapologetic stance taken through the things he says and does. Try not to read any of his social media posts with liquid around you as he is liable to say anything and uses his writing skills in such descriptive ways, his audiences are left either wanting to fight him or laughing until their sides hurt. This father of one daughter also epitomizes that single dads can raise children into thriving adults without question, and he shares that journey at times with an enthralled audience.

After graduating from Penn State in 1997, Frisby covered police officers for The Philadelphia Daily News before jumping over to feature writing. Since that time, he has also authored six books, including two novels, two motivational books for young adults and two short stories that were best sellers on Amazon. For the last seven years, he has also hosted and produced a series of wildly popular live music jam sessions throughout the city.

Recently Frisby, 45, a South Philly native, made the jump to the film industry. On October 8, he made his debut as producer with the premiere of an episode of ‘Buried in the Backyard’, a true crime docu-series on the Oxygen Network. The episode centers on the disappearance of a childhood friend and William Penn High School track star Shilie Turner in 1993.

His debut short film, “The Illadelphia Glow,” a sci-fi drama, premiered worldwide on the digital platform Amazon Prime on October 16.

Earlier this year, Frisby was selected to be inducted into the Overbrook High School Hall of Fame, although the ceremony was postponed due to the COVID-19 pandemic.

In addition to pursuing professional goals, Frisby has also made a name for himself as a community leader, activist, and mentor. For more than a decade, he was head coach of two summer track programs —Oak Lane Youth Association and PhatBack Athletics — where his student athletes had a 100% high school graduation rate.

Frisby has coached two national champions, six state champions and more than three dozen league champions during his career. He has also proudly raised more than $100,000 in grants and scholarships for Philadelphia students.

I asked Frisby a few questions so that the reading audience could get a better sense of this icon.

AS: Where did your love of writing come from and who inspired you to this place?

MMF:“In regard to my writing, my departed mother Joyce Poindexter was the greatest influence to my craft because she had the foresight to transform our hall closet in the projects into a mini-library. It was right behind the front door. She bought new and used books from stores, yard sales, and thrift shops near South Philly. It started out being just for us, but as time went on she loaned out the books on the honor system. If we ran into somebody while food shopping down 9th Street, she would quickly remind them that they were overdue on bringing back a Stephen King novel. Right there at the meat counter, you would get that reminder.”

AS: How many books have you authored?

AS: What made you decide to write the “Illadelphia Glow,” and what was the premise behind it?

MMF: “I grew up watching re-runs of “The Twilight Zone,” “Alfred Hitchcock Presents,” and “Amazing Stories,” just to name a few. I have always been fascinated with the limitless possibilities of sci-fi and Black people, so it should come as no surprise that my first film feels like all of those things. For “The Illadelphia Glow” I only had 18 minutes to tell a full story, and from the early reviews I can see that I am dropping a lot of jaws because of how it ends. That’s what I was going for. ”

AS: Have you always wanted to do films?

MMF: “I have wanted to tell my own stories on screen since being a very little boy and falling in love with “The Bionic Woman” and “The Six Million Dollar Man” television series. I would rewrite the episodes and change the endings for fun. And now that hobby has brought me here.”

AS: What is your hope for this short film and who or what inspired the characters?

MMF: “My goal is for a major studio or streaming platform to greenlight the full length 90-minute version of “The Illadelphia Glow” or a 10-episode series. Either way, I’m ready to take it to that level because the full story is in another stratosphere all together.”  The two executive producers are Grammy Award-winning hip-hop icon Deidra Roper better known as DJ Spinderella of Salt-n-Pepa fame and lawyer/activist Michael Coard. Female lead Crystal Lee Brown graduated from Bodine High School and Temple University.

AS: You host a brunch each year in Philadelphia for graduating male seniors. Tell us about it.

MMF: The Annual Achievers Brunch honors 50 of the brightest young African American men in Philadelphia. The honorees are all seniors in high school with exemplary GPA’s and community service on their resumes. (public/charter/Catholic/private are all eligible) I founded the brunch and work alongside Dr. Doreen Loury of the Black Male Development Symposium to make it happen. Some of the schools they are presently matriculating in are Harvard, Howard University, Temple, University of Penn, Morehouse, Penn State, Columbia and NYU to name a few.  Sadly, 2020 was canceled due to COVID. We will hopefully resume with the 3rd Annual [brunch] in May of 2021.

Mister Mann Frisby can be contacted via email at: [email protected]

Leon : The Dimensions of a Renaissance Man