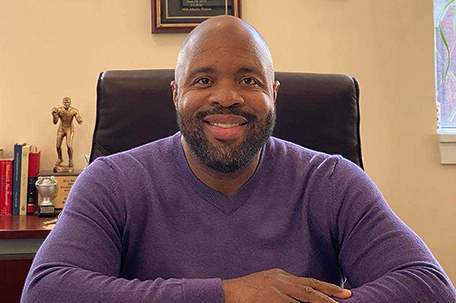 For Ryan Boyer, becoming the new business manager of the Philadelphia Building and Construction Trades Council allows him to help more people in more unions.

As part of his campaign for the Democratic nomination for the U.S. Senate seat currently occupied by Pat Toomey, Congressman Conor Lamb spent a significant part of last week in Philadelphia.

Much of that time he spent with Ryan Boyer, Business Manager of the Philadelphia Building and Construction Trades Council.

Boyer took part in several events spotlighting Lamb and his candidacy in an attempt to introduce the congressman from Western Pennsylvania to a public that largely doesn’t know him.

The argument could be made that the political realm is the last place that the Building Trades should be right now. Boyer was elected business manager to fill the unexpired term of John Dougherty, who stepped down in November after being convicted on federal bribery charges.

It’s an argument that Boyer, who served as business manager for the 6,200 members of the Laborers District Council before taking this new job, strongly disagrees with. In fact, he says, the Dougherty trial showed him that it’s now more important than ever for unions to stand up for their members.

“We use the same tools that corporate America uses,” Boyer said. “They’ll put their lobbyists and lawyers on Capitol Hill. I think [the trial] was a travesty and it’s not going to change the way that I do business. I will lobby just as vociferously and as zealously for my membership as we always have been.”

Boyer is the first Black business manager in the history of the Building Trades and is a second-generation laborer. He’s got a lot of constituencies, including a city in need of good paying jobs, that will be watching to see how he does.

The SUN spoke to Boyer about his new job, what he hopes to do to bring more Philadelphians into the building trades, and the future of the union movement in Philadelphia.

SUN: Thank you for taking the time to sit down and talk to me, Mr. Boyer. First of all, congratulations on becoming the new head of the Building Trades. What has that been like?

RB: Well, it has been an extension of the work that we were already doing. And, for me, it’s bittersweet, because I feel that the trial that [Dougherty and Henon] got was very unfair. But we have to be caretakers of the institution. And I feel like, you know, that we were in a position now, to make sure that the institution not only survives, but thrives.

And so we’re just in that mode of really just doing the things that we do well; doing them better, and mainly illuminating light on the opportunity so everybody can know about the opportunity. Like taking it out of being like a closed society, to more one where there’s transparency in our processes are how we take them, and transparency about knowing the criteria. We’re not going to dumb down the criteria, but we’ve got to let everyone know that this is the criteria you must reach. This is when we take people. This is how many people we’re going to take. And we think that once people know, the opportunity will get applicants a more diverse applicant pool.

SUN: Now, when you talk about ‘knowing the criteria,’ is that in the case of getting union jobs and apprenticeships?

SUN: When it comes to being the new head of the Building Trades, was it something that you wanted to do, or did someone have to talk you into it?

RB: Maintaining the whole labor union movement. It is the movement that has gotten me everything that I have in my life. So, I owe this movement everything. And I believe in paying workers a fair, honest wage. I believe in letting them work in dignity and letting them work safely. And the only way I think that you do that in the construction industry, is by being a member of a trade union. I don’t think that if you look all over the country, in areas where you have a strong labor movement, you have construction workers make more money, there’s less accidents, and it’s a very safe environment. But if you go places where there’s not a union, you see a lot of construction accidents. And the jobs are horrible jobs, which is why you see a lot of places throughout the country where people can’t get workers on construction sites, because COVID let people know that some of these horrible jobs aren’t worth having.

So, when you pay people the correct way and give them the correct training, you have an industry where people can actually send their children to college, buy a house and be a part of the middle class. I believe in that. And I did not want that to be foreclosed upon. I knew that I had the power to do something about it.

SUN: Were you following the trial of John Dougherty and Bobby Henon? What did you think about it?

RB: I followed the trial very, very closely. I think it was a travesty, and that what you  had on trial was classism and rough talk. People didn’t like the way politics was done in Philadelphia. But, hey, you look at any of these major corporations, they have 20 or 30 lobbyists and City Hall, when City Hall was open, there were lobbyists from corporate America, major corporations, and major universities. But now, they want to make it illegal, and it’s a travesty.

SUN: I saw you at one of the endorsement press conferences for Congressman Conor Lamb’s run for the Democratic nomination for Senate. We looked at campaign finance reports and they show that one of the biggest donors to political campaigns in Pennsylvania was Local 98. Are the unions going to continue to be as politically active in that way, or is there little nervousness about doing that, in light of what happened with Dougherty and Henon?

RB: Unions are going to be more politically active. We still need the legislators of the state houses, City Council, and the federal government to put policies in that favor working people, and we’re going to be aggressively doing that. The IBEW 98 PAC didn’t go anywhere. The Laborers District Council PAC fund didn’t go anywhere. All of the other building trades with PAC funds didn’t go anywhere. And in fact, that will increase as we increase man hours. And I would expect us to be more involved politically in a more strategic way. We’ve changed some rules around endorsements, so now they carry more weight. We went from requiring 2/3 of the membership for endorsements to requiring ¾ for endorsements. So, when you get an endorsement from the Building Trades, it carries more weight, because you’re getting an endorsement from 75% of the membership.

SUN: So, one of the knocks that the Building Trades has had against it traditionally, is a perception that it’s not an open space for Black and Brown workers. That it’s harder for them to get in. And it’s harder for them to get apprenticeships and different things. One, is this actually the case and two, how do you make it so Black and Brown workers know it’s not the case?

RB: Well, I’ll say two things — I will say that we’re getting a lot better at that. I’m hoping we can do better in every industry. I think that the building trades have been a very unfair whipping boy. And while the numbers aren’t where we want them to be — and we’re going to improve those numbers — they’re a lot better than most industries in Philadelphia.

But we’ve got to get better. And how we get better is we highlight the programs that we have. And what we’re going to do also is make [it] more transparent. When we have apprenticeship plans with the various unions, we’re going to have a website we’re going to do when we approve the marketing budget. We’re also going to market to the community when these things come on.

SUN: Well, thank you so much for your time, Ryan. We really appreciate it.