The Real and the Imagined 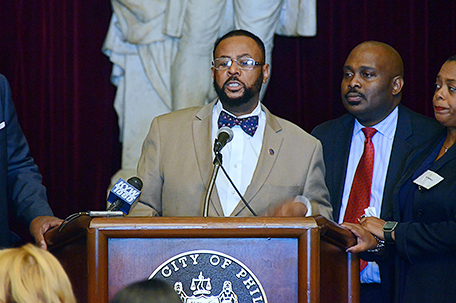 What started out as a simulation of the challenges that the 26 percent of Philadelphians living in poverty  have to face on Tuesday turned into a field trip for the event’s organizer.

The purpose of the gathering of City Council people and their aides in the Mayor’s Conversation Room in City Hall on Tuesday was to give this group of people the chance to experience some of the issues that the 26 percent of the city’s population that lives in poverty deal with every day.

But what was supposed to be an illustration of the issues of poverty in a controlled environment became an opportunity to speak with people dealing with poverty in real time for City Councilman Curtis Jones Jr (D-  Dist. 4), one of the event’s organizers.

Jones– who was joined by fellow Councilpersons Cindy Bass (D- 8th Dist.), Derek Green (D- At-Large), Allan Domb (D- At-Large) and Bobby Henon (D- Dist. 6)–put together the event with the city’s Office of Community Empowerment and Opportunity and the Department of Housing and Urban Development. 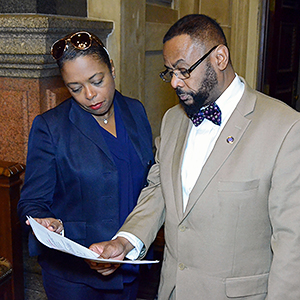 It was a simulation that included such things as cashing a check at a bank, paying a past-due electric bill and rent when there’s only enough money to do one or the other, feeding a family of five on less than $300 in food stamps and dealing with children with issues ranging from behavioral problems to mental illness.

The idea behind it was to give his colleagues some insight into what these citizens face as a means of helping them get better services from their city, Jones said.

“Twenty-five million Philadelphians live this reality every day,” he said. “Some of them are in deep poverty. We’re here to experience something we don’t have to.”

Many of these people don’t fit the stereotypes that many people have when it comes to the poor, said Bass, whose experience as a child growing up in a single parent home where times were often tight informed her participation.

“A lot of these folks go to work every day,” she said. “But they work for people who don’t want to give their workers a living wage or health insurance. It’s shameful. We have to push our corporate leaders to do better.”

Pamela Lawrence, an administrator from the Department of Housing and Urban Development, introduced the simulation, which divided the gathering into small groups representing families. They were going to read the scenarios and go through them accordingly. 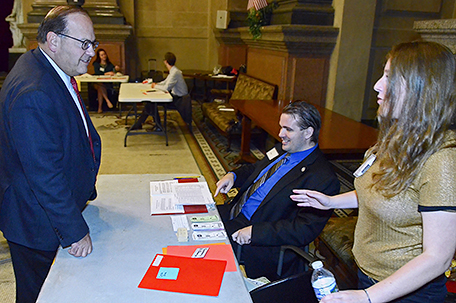 Or at least that was the idea. After Lawrence finished introducing the simulation, Asa Khalif of Black Lives Matter Pennsylvania and Isaac Gardner took to the podium, and while he didn’t want to be rude, he said that he also believed that this was the wrong place for council to learn about the issues that those dealing with poverty face.

The right place was the streets.

The two men then waited to see who was interested in making the trip.

Only Jones, the councilman who had organized the simulation in the first place, was game. He walked out the door with Khalif, Gardner and Techbook Online’s Christopher “Flood the Drummer” Norris filming the visit. According to the Associated Press, the group ended up in Kensington, where Jones interviewed residents and saw true, intractable poverty up close.

He was shaken by the experience.

“We have to do better,” Jones told the AP. “We can’t just allow this.”

Meanwhile, the rest of the participants continued with the simulation, knowing that one of the emotions that poverty induces is anger.