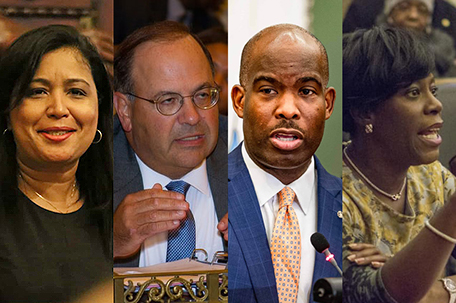 Although Mayor Jim Kenney has more than a year left in his term, candidates to replace him in the Big Office In City Hall are already lining up.

In addition to two major statewide races — Pennsylvania is electing a new governor and a new United States Senator as well as members of the legislature — Philadelphians will also be choosing four new City Council members.

Since it was changed in1951, Philadelphia’s City Charter has mandated that if you are a city employee or currently hold a political office in the city, you have to quit your job in order to run for office. This means that if you’re a member of City Council —- like Mayor Jim Kenney was before deciding to run for mayor — you have to step down to take a run at the big office. Thus, Council President Darrell Clarke has issued writs of election

Of the four former Council people, Domb is the only one who is still testing the waters before leaping into the mayoral pool. Green, Quinones Sanchez, and Parker are already swimming. While there have been former council members that have left the job with more than a year left to serve to run for mayor, this is the first time that this many of them have made the leap this soon, council watchers say.

The SUN was able to sit down with most of the potential candidates hoping to become Philadelphia’s next mayor. Here’s what we found:

Derek Green: Think about the future

During his time in City Council, former Councilman At-Large Derek Green was the chair of the finance committee and was also taking the lead in creating a Public Bank that would serve areas of the city that commercial banking seems to have forgotten about.

It is this knowledge of city budgets, experience in the District Attorney’s office, and his experience representing the city as the president of the Democratic Municipal Officials and the National Black Caucus of Local Elected Officials, that he hopes to bring to the mayor’s office should he win.

He’s running because he believes that the city has been shortchanged long enough, and it’s time for it to get the leadership and services it deserves.

“This is a decision I’ve been thinking about for some time,” Green said. “I decided to run for mayor because I believe the citizens of the city of Philadelphia should expect more and deserve better from our city. And when you think about all the challenges that are happening, especially records of gun violence, these are all issues that have really been weighing on me. And I see that we need some leadership to address these issues in our city.

Prior to becoming a councilperson, Green had served as an assistant district attorney, a branch manager and lender at Meridian Bank, and a small business owner (he and wife Sheila owned a shoe store).

In a city that is dealing with both a major gun violence problem and a seemingly intractable poverty rate, the fact that Green formally announced his campaign at a barbershop whose owner also runs a mentoring program that focuses on helping young people find their economic footing.

“What they’re doing is showing young people that we can put down guns and pick up paychecks,” he said. “And that’s the focus of my campaign, focusing on how we not only address gun violence without violating the rights of our citizens, but also showing how we can provide better economic opportunities in our city. Right now, there are thousands of jobs on the horizon for the City of Philadelphia.”

Another of the jobs that Derek Green had before deciding to run for mayor was working as an aide to former City Councilmember Marian Tasco.

As you’ll see throughout this story, Tasco, whose endorsement of Jim Kenney and the Northwest Coalition power it brought with it helped him become the mayor, has played a part in the political lives of many of the people running for the Big Office.

Governing from the majority

When she decided to leave the Pennsylvania State House in 2015 to run for the City Council seat being vacated by her mentor, City Councilmember Marion Tasco, Cherelle Parker told voters that she would bring one thing to council that no one else on the body currently had.

That something: the ability to speak Harrisburg. From finding a way to get money to the School District of Philadelphia so that I could open on time, to putting together a package of property tax initiatives that helped long-term residents keep from being taxed out of their homes, Parker sees the respect that she’s garnered from her colleagues in Harrisburg as her superpower.

“I had to go work with Democrats and Republicans and independents and people from rural Pennsylvania and figure out where to find a compromise to fix things in our fair city,” she said.

Now, she wants to use that superpower as mayor of Philadelphia.

“We need a leader who’s strong enough to stand up and do what is right, and make the decisions to fix our city,” Parker said. “I’ve never been about simply doing what is popular.”

Parker believes that public safety has to be Philadelphia’s number one priority. She wants to put 300 community policing officers on the street should she be elected and also believes that making sure that the city’s public amenities, such as libraries and parks are the best they can be is also important.

Should she be successful in her quest, Parker would become the first woman to hold the office in the city’s history. While she thinks that’s important, she hopes to have a campaign that makes everyone in the city feel included.

“I have had some people who have [talked about her making history] to me, and it is significant,” she said. “But you know, I stand on the shoulders of men and women who have helped give me access to opportunity. So, it’s not lost on me that little girls from all walks of life, that ‘girl dads”, that uncles will be able to say to the women in their lives, ‘See, if she can do it, you can do anything.’ And that’s the best. But it’s going to take people from all walks of life. And I’m going to bring them together. We’re going to put together the most diverse coalition this city has ever seen.”

If there is anyone among the current group of people either running for mayor of Philadelphia or considering the job that can speak to all or most of the city’s issues, it’s Maria Quinones-Sanchez.

Since 2008, Quinones-Sanchez, the first Latina to serve on Council, has represented the Seventh Councilmanic District in North Philadelphia. That means that in addition to the gun violence, poverty, and educational issues that her colleagues faced, she also had a workforce made up of essential workers constantly exposed to COVID and a section of the district, Kensington, that has been the longtime center of the city’s opioid addiction problem.

“I often tell people, you know, I plan my days, and I work hard and smart,” she said. “But then when you’re representing the Seventh Councilmanic District, you plan your day, and then [stuff] happens. [The first week of school] we had two shootings at schools. So again, I planned the week, but I was able to do certain things, like call an emergency meeting with [Police Commissioner Danielle Outlaw] and how to rally folks. So, understanding around the critical nature of where we are, and the challenges is what better prepares me versus the other candidates. Understanding that we can take care of our most vulnerable communities and grow the city.”

Being the mayor would give Quinones-Sanchez, who recently recovered from breast cancer, the chance to fix a lot of the problems that she saw as a Councilmember, but couldn’t do a whole lot about, she says. Should she win, she would become the first Latinx mayor in the city’s history, in addition to being the first woman to hold the office.

While most people would see this as a reason to be discouraged, she sees it differently.

She sees her candidacy as the beginning of the end of the “Philly Shrug.”

“It’s a strength,” she said. “The Latino community is still maturing.

So, we have a district, that has been faced with a lot of political corruption, and a lack of voter participation, because people have been extremely frustrated that government is not responding to our most marginalized communities, I think, because of that, [not having the party’s endorsement] makes me a better candidate. I think that the mayor has to work for people, not special interests.

I believe people are going to find it appealing. This is really about how do we create some structural changes and disrupt business as usual. I am a proud Philadelphian who is just tired of this “Philly Shrug,” tired of ‘Well, this is Philly and this is what happens.’ We can do better, and our residents deserve better.”

In an interview he did with the weekly PhillyCam program “Philadelphia Hall Monitor,” former Councilmember At-Large Allan Domb laid out the qualifications he believed Philadelphia’s next mayor should have.

His answer served as notice of his belief that he could be that person.

“I think number one is leadership and a vision for the city,” he said. “You have to set out a leadership vision of where Philadelphia is today, and where it should be in five years, 10 years or 20 years.

[The mayor] should be the city’s biggest cheerleader. He should always look at the glass as half full, never, ever half empty. My father used to say to me that when life gives you lemons, you need to make lemonade. And you need a cheerleader that supports every resident of the city, supports every business, wants to expand the economic base, and wants to bring together law enforcement to improve public safety.”

“Every job is 51% personality and 49% technical,” Domb continued. “That includes the mayor’s job. That person needs to love people and to love to want to help people.”

From the moment he became a City Councilman in January 2016, Domb has done things differently than many of his colleagues.

A real estate developer by trade, Domb never took home his City Council paycheck, choosing to donate it to the School District in the form of grants that would help schools pay for everything from new copiers and books to sending teachers to the Federal Reserve to learn how to teach financial literacy to their students.

He’s also been a proponent of changing the city’s tax structure, helping get cuts of the city’s wage and business privilege taxes approved. Domb was also the person on Council that reminded everyone of the Earned Income Tax Credit, and the money that city residents that didn’t claim it were losing.While he was the first of the Council members to resign his seat to run for Mayor, he hasn’t officially declared his candidacy, opting to go on a listening tour first to hear from city residents.