The Price Of Ambition 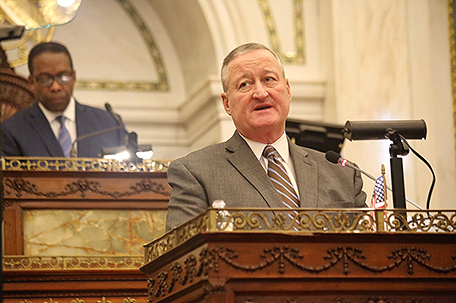 With his proposed 2019 fiscal budget, Mayor Jim Kenney wants to do a lot.  But how he plans to pay for it might stop his ambitions in their tracks.

Last November, the School Reform Commission voted to dissolve itself and give control of the School District of Philadelphia back to Mayor Jim Kenney.

One of the main questions that many had was, “What about the deficit?!” The School District is looking at a $900 million deficit over the next five years and the consensus is that the Commonwealth, the district’s overseer for the last 16 years, isn’t inclined to provide any real help.

In his 2019 budget, Mayor Kenney put together a package that would stabilize the district’s finances by providing $980 million over five years. That’s the good news.

But the Mayor is going to have to find some way other than the 6 percent property tax he’s proposed if the initial reaction from Council members is any indication.

“I like the idea that there’s a whole lot of ideas about how we raise money for education,” Councilwoman Jannie Blackwell, chair of Council’s Education Committee said. “I’m just afraid of real estate taxes. I’m never for real estate taxes. They frighten me.”

In a subdued speech sprinkled with references to the Philadelphia Eagles Super Bowl victory, Mayor Kenney shared the vision behind his $4.690 billion budget.

“Right now, the schools are at a crossroads,” Kenney said. “While academics, graduation rates and other academic measures are on the way up, the district’s $900 million deficit stands to derail the progress for the group he called “the real underdogs”, Philadelphia’s student.”

“We can’t wait for the calvary to come,” Kenney said. Making sure that Philadelphia’s children get what they need is going to be up to Philadelphians.

“There is nothing left to cut,” he said. “There is no one else to turn to. While we continue to press the Commonwealth to meet its constitutional requirement to fund schools adequately, we can no longer afford to wait for other people to act. Right now, it’s up to us.”

The way that the package breaks down is a combination of boosting the City’s contribution to the School District, the aforementioned 6 percent property tax increase, an increase in the Homestead Exemption, rescheduling reductions in the city’s wage tax, and an increase in the real estate transfer tax.

“While it sounds like it’s asking a lot of a city with a 26 percent property tax rate, making the District’s schools better is that important,” Kenney said.

“The only way our 26 percent poverty rate will be reduced is through education,” he said.

But while Council members are more than happy to no longer be, as Councilman Curtis Jones said, “a non-custodial parent paying child support” when it comes to the School District, and they all agree that education is the path out of poverty, but asking the poor to pay for that help doesn’t seem fair.

“I’m not going to say never,” Jones said. “I’m just going to say ‘not now’. I want to see where the dollars go and where we’re getting them from…sources of funds and uses of funds. If we can [pass the Mayor’s school funding plan] without raising real estate [taxes], I’m happy.”

“The notion of placing yet another tax burden on our homeowners is not the answer,” Councilwoman Cindy Bass said. “Many of these residents cannot even afford to make the necessary repairs to their homes, much less take on additional tax increases.”

For many of those on Council, the possibility of sticking residents — and potential voters — with a 6 percent real estate tax increase with elections looming wasn’t something they wanted to do.

So they came up with other ideas.

Councilwoman Helen Gym, a longtime education advocate before getting elected to council, agreed that Harrisburg needs to be pushed a little.

“The significant investment effort by the City of Philadelphia in its schools now shines a light on the state’s responsibility,” she said in a statement. “City Council, under the leadership of Council President Darrell Clarke, has stepped up time and again to cover school deficits that the state has ignored – even when the Philadelphia public schools were under state management. Philadelphians are paying their fair share, but our state is not.”

“The Trump Administration has given a tax windfall to large corporations,” she said. “Businesses are held harmless in this budget. Any budget that assumes the responsibility is only on residents is one I can’t support.”

“There are other ways for us to pay for this and they’ll save us money,” Councilman Allan Domb said. “One is to collect delinquent taxes, which the city is already doing. The other is to close the house of corrections. That would reduce our prison budget by 15 percent.”

But another source of obvious revenue would be to either scale back or eliminate the 10-year-tax abatement.

“I cannot in good conscience support a property tax increase on our most vulnerable citizens while a 10-year-tax abatement that largely benefits more affluent residents still exists,” Councilwoman Bass said.

Council is scheduled to begin hearings on the budget soon. The budget must be passed by June to be done in time for fiscal year 2019.