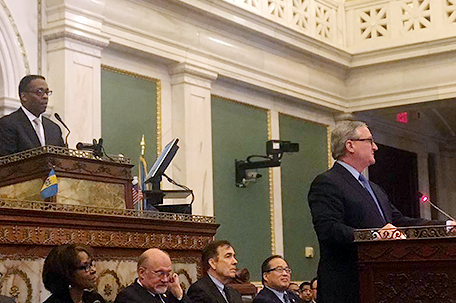 In his first budget address, Mayor Jim Kenney proposed a tax on sugary drinks to fund an ambitious Pre-Kindergarten program.

For most of the last 23 years, Jim Kenney sat and watched as various mayors delivered their budget plans from his days as City Councilperson at-Large.

On Thursday, Kenney was on the other side of the podium as he gave his first budget address as Philadelphia’s mayor to a packed house in City Council chambers.

In a speech, punctuated at times by cheering activists in the gallery, Kenney laid out a $4.17 billion plan that included:

•  $600 million to refurbish the city’s libraries and recreation centers;

•  $550,000 to pay for body cameras and equipment needed to maintain them for the Philadelphia Police Department;

•  An ambitious universal Pre-Kindergarten program that would provide up to 25,000 quality pre-k seats for the city’s 3 and 4-year-olds with an investment of $256 million over the next five years.

The Pre-K program could go a long way toward helping a city with a 26 percent poverty rate do better by its kids and by itself, Kenney said.

“A report frequently cited by the Economy League found that for every $1 spent on Pre-K, at least $1.79 is generated in local spending,” he said.

“According to the City’s Pre-K Commission, Philadelphia could spend $5.6 million per grade cohort if all children were enrolled in quality pre-K.”

Most importantly, a quality pre-k can help the city’s students avoid a lot of the pitfalls that come from not having a quality education, Kenney continued.

As an example, he used a recent visit he made to some schools in the city’s Mantua section. One was a pre-K program similar to the ones he would like to create for all of the city’s students.

The other school was in the Philadelphia Correctional Industrial Correctional Center in the city’s Pennypack section. When he was talking to the students there, what one of them said got him thinking.

“He said that this was the best school he had ever been to,” said Mayor Kenney.

To fund a lot of this, Kenney has proposed something that his predecessor, Mayor Michael Nutter, also proposed: a tax on sugary drinks—specifically a tax of 3-cents-per-ounce.

Kenney admits that getting this tax passed won’t be easy. The same people who lobbied against the tax when Nutter proposed it have already started marshalling their forces.  “But it’s worth taking a shot,” said Kenney.

“I don’t have anything against our city’s large distributors or even the big soda companies.  I think they’re good people. We just disagree on this issue.”

While everyone agrees that revamped recreational facilities, good community schools, and quality pre-kindergarten classrooms are good and important things for the city to have–but the willingness to spend an extra 3-cents-per-ounce tax on a can of Coke to support those improvements depended on who you asked.

Larry Miller, spokesman for a group of restauranteurs, supermarkets and movie theaters called Philadelphians Against the Grocery Tax Coalition, said the tax makes no sense for a variety of reasons.

“It’s been tried across the country and it’s failed,” Miller said. “If people are drinking less sugary drinks, it wouldn’t be a steady source of revenue.”

For some, like Councilwoman Maria Quinones Sanchez, the impact to the people she represents has to be seriously considered. Sanchez has a Coca-Cola plant in her district that is considering expansion and has been a steady employer for the community.

“We had these same conversations last year,” she said. “We have to look at the legal opinions and the enforcement piece.”

But to Rodney Muhammad, president of the Philadelphia NAACP, that .3 tax is a much better idea than financing these much needed services by hitting residents and homeowners with another levy.

“The City’s property taxes have been raised four times in the last five years,” he said. “It’s time for the people who are making profit off of our city to shoulder some of the burden.”

Because of how early in the process this discussion is, councilmembers have yet to talk about how the proposed tax, Council President Darrell Clarke said.

The first public hearings on the City budget are scheduled for March 29.

Roebuck unveils alternative to vouchers: ‘All Students Can Succeed’