The Power of One: A senseless murder gives rise to a movement for change 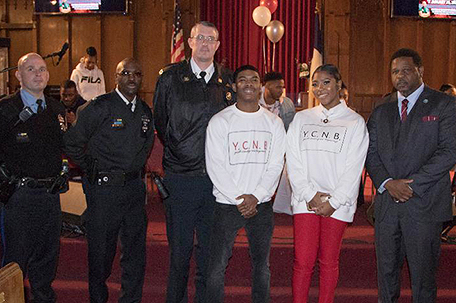 Bill Bethel was not among the gathering at House of Faith Baptist Church, UCC in Logan, but he was in the hearts of everyone there.

Police officers from the 35th district were on hand, seated in the sanctuary alongside Lt. Michael Zimmerman. They came to listen and talk to youth.

A number of young pastors joined the dialogue, the kind who work away from the media spotlight and breathe life into the neighborhoods worn by age. Philly elected officials also had a supporting role.

Cierra Brown, age 17, stood confidently before them in front of the church in late January with a microphone, leading a panel of youth who are trying to make the city better by uniting their peers in an effort to promote to stop the violence and provide their generation with a more secure future: It was billed as the Talk Heavy Summit: Youth Actions Speak Louder Than Words.

Brown and Bethel were forever friends. Bethel, who was slain on an Easter Sunday in 2018 during a dispute between youth groups on South Street, used to share his mantra with her:  Stay persistent. Believe in yourself. Chase a dream.

And that is why, even though she is still a senior student at the Mathematics, Civics and Sciences Charter School of Philadelphia, Brown felt she had to step up to stop it from happening again.

After his death, Bethel was eulogized as a promising sophomore at Boys’ Latin of Philadelphia High School, and as a nice kid who made everyone laugh. He would have turned 18 next month.

“I realized that I should give back to my community in a positive way even though that (Bethel’s death)  was a negative effect on my life,” Brown said. “So then, afterwards, I decided to create Youth Creating New Beginnings (YCNB) to help people realize that there are positive people out here and we all could just come together in unity and make positive things happen.”

She and her friend, Milaj Robinson, co-founded Youth Creating New Beginnings, a group that has brought old and young folks together, to talk  about heavy topics such as violence, the need for unity, the far-reaching impact of mass incarceration, and disrespect of African American women.

Just to be clear, some of her friends didn’t think the older folks should be included but Cierra wanted everyone there. The conversation was brutally honest — even painful. “We have a state of emergency,” one young speaker said.

What surprised Cierra about the hours-long conversation, which brought together hundreds of people from different neighborhoods, different generations and different faiths to discuss both the divides and the opportunities.

“I feel like it touched a lot of people,” she said. “Sometimes people hear it but they’re not really listening. So I definitely feel as though they got information that they probably didn’t have today, or yesterday.”

One critical lesson to emerge is that people within the same racial community don’t necessarily speak the same language nor do their values and beliefs transfer across generations. That can make it harder to partner, Brown said.

For example, youth in the audience explained that when someone acts too familiar with a stranger- even in a well-meaning way with an intention of helping him or her — it can backfire. Young people refer to this as being joe, a slang term that means someone is being too familiar. “Being joe only holds us back,” one speaker explained to the elders.

There were other important reminders for parents. “Kids never look at what you say. They watch what you do. You have to be intentional about it,” advised Rickey Duncan, executive director of operations for NoMo Foundation. His group offers early intervention strategies and success strategies for youth,  providing life skills, financial literacy, vocational training and more.

He said Philly youth’s have been given a lot of empty promises. It is important that adults begin to deliver on the promises they make, he cautioned.

“When we show up at City Council, we shouldn’t just come with complaints, we should come with a plan.”

Brown already is plotting next steps. YCNB is planning a fashion show next month, and another Talk Heavy summit will be held in 6-12 month to continue the dialogue and develop an action plan.

Shortly after the event, she received an invitation to speak at Harrisburg University, and she carried her message of unification across the state. Using Twitter and Instagram to communicate, the youth are spreading the word of their effort to bridge the generational gap and work toward solutions.

“When a young person has a vision and a dream, it is our job to make sure their voices are heard. It (Youth Creating New Beginnings) is going to get bigger,” he told the crowd.

BPRW History Announces “Rise Up: The Movement that Changed America”