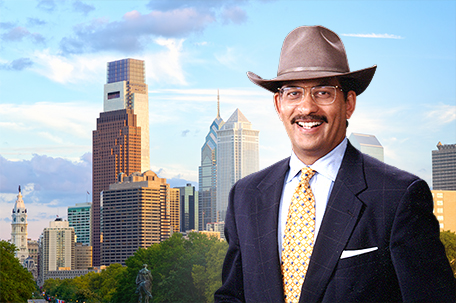 Ed. Note:  This Sunday, October 14 would have been SUN publisher Jerry Mondesire’s 69th birthday. Coincidently, his birthday always fell on or around the Philadelphia NAACP’s Annual Gala, which during his tenure as president, guaranteed that it was always a beautiful evening with great food, great entertainment and great people being honored.  In his honor, the SUN reprints Jerry’s bio on the eve of the 2018 Philadelphia NAACP Awards Reception and Gala being held on Friday, October 12.

In 1992, Jerry Mondesire launched the Philadelphia Sunday Sun. For him, it wasn’t just about business, it was a lifelong dream, a commitment, and a voice for change. In many ways the Sun is representative of Jerry’s life; starting from humble beginnings and growing into a leading voice not only locally but nationally. As one of the founders of the Philadelphia Association of Black Journalists, Jerry Mondesire was “the man who was always our conscience.”

Mondesire was born in Harlem, New York City on October 14, 1949, to mother Winnifred Taylor and father Jerome Alexis Mondesire.  He was the youngest of four, so “scrappy” was a not a choice but a necessity.  From his father, a follower of Marcus Garvey, Jerry learned about politics and activism. 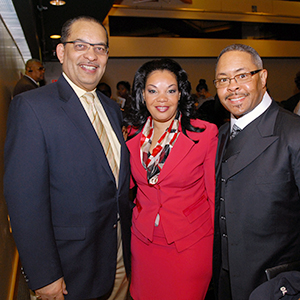 He learned the ethics of hard work at an early age, often describing how his mother worked as a domestic and also held a job as a seamstress to make ends meet.  Sadly, she died when he was still young, making his life unstable.  He moved around to live with many different family friends and relatives as he finished junior high and high school.

Mondesire went on to attend the City College of New York where he studied journalism and also where he took on a major role as one of the organizers of the college’s historic takeover in 1969.  He also was instrumental in founding and publishing what became officially known as “The Paper” which is still in print today. As it was noted during a celebration of the 33rd Anniversary, “the diversity and opportunity enjoyed by current City College students is a direct result of these revolutionary actions”.

Long after his graduation, he continued to support “The Paper” both financially as well as offering guidance to those charged with governance in later years.  Never forgetting where he came from and committed to giving back. 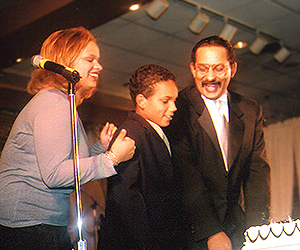 Jerry with his daughter Jennifer and son Joseph at the NAACP Gala celebrating his birthday with a cake.

After college, he became a reporter at the Baltimore Sun where he began as many young staff writers doing obituaries.  He also covered the now infamous “Black October” killings of a Maryland state senator in 1973.  His distinguished work caught the attention of many newspapers around the country and in 1974 he took a staff position at the Philadelphia Inquirer where he covered politics.

He became the assistant city desk editor, the first African American to hold that position, but decided in 1977 to go into politics full­time.  He left the newspaper and joined the staff of a young Congressman William H. Gray.

As a top aide to the congressman, Mondesire took on all shapes and sizes of issues from voting rights to South African sanctions. One of his fondest memories while working with Gray, was meeting South African President, Nelson Mandela.

When Gray retired, Jerry went to work briefly at the United Negro College Fund but that was not for him.

He wanted a platform to continue doing the work he loved so he started the Philadelphia Sunday Sun, providing a news source of information for the African- American community. He also developed TV and radio programs called “Freedom Quest” which focused on local current events concerning minorities in the Greater Philadelphia Area. 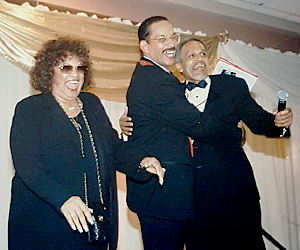 Some of his accomplishments during his tenure include helping to pass laws that gave ex­offenders the right to vote in Pennsylvania and tackling diverse issues from Pennsylvania’s voter ID law to improving the public schools.  “Jerry used the power of the pen and the bullhorn to advocate for those in Philadelphia without a voice,” says Cherri Gregg, president of PABJ. “He fought not only for Philadelphia’s Black community but for all people of color, and wanted nothing more than for all people in this city to be treated justly.”

“Jerry was a champion for equal rights and an early member of the Philadelphia Association of Black Journalists,” said Sarah Glover, president of the National Association of Black Journalists (NABJ) and a former two­ term PABJ president. “He’s had a lasting impact on the City of Philadelphia by developing many of the city’s young leaders and journalists. His fearlessness while speaking truth to power stands out as much as his signature cowboy hat. He challenged me and others to be bold in our leadership. I will work to that end and remember the man who fought so hard for equality for all.” 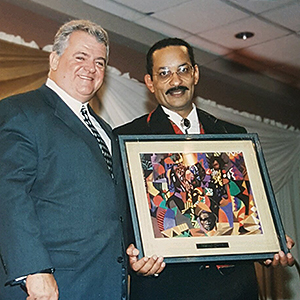 Cong. Bob Brady receiving a NAACP Award Print from Jerry at one of the NAACP Galas.

“Jerry was one of the most talented and skillful writers and journalists that I have known,” the late Acel Moore, one of the founders of PABJ and NABJ, said at the time of Mondesire’s death. Moore met Mondesire when he began working at The Inquirer. “He was a force at the newspaper and made a contribution to journalism in a significant way and made sure his voice was heard as leader of the NAACP on many issues that affected African American people.”

“To me, Jerry was one of the great leaders of Philadelphia ­ right up there with the Cecil B. Moores,” said Loraine Ballard Morrill, news and community affairs director of iHeartMedia’s Philadelphia stations who met Mondesire in the 1980s. “He was someone who made a difference in the lives of people. He wasn’t afraid to take on anybody, not afraid to take on the corporations, not afraid to take on politicians. I don’t see that type of leadership today. I hope that someone will come up that will have the type of passion and courage that Jerry Mondesire had. He was one of my dearest friends. I will miss him.”

We at the SUN are honored to have worked with J. Whyatt Mondesire and we will proudly continue to hold up his standards of activist journalism and hard work.