The Philadelphia NAACP ushers in a new era 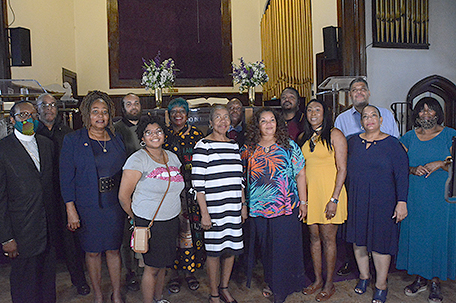 Philadelphia’s African American community has had a lot on its plate over the last year or so.

From a global pandemic that hit the Black community like a freight train, to a wave of gun violence that’s killed 309 people in 2021 as of press time, to attacks on the right to vote coming from Harrisburg at the behest of the former president of the UnitedStates, Philadelphia’s Black community has been dealing with a host of issues that would normally be handled by its chapter of the NAACP.

Eight other officers and 18 executive board members were also installed at the swearing-in ceremony at West Oak Lane’s Mount Airy Church of God in Christ.

Hicks understands the challenges ahead of her and is looking forward to working with groups such as the National Action Network, the Philadelphia Freedom Riders, the Black Clergy of Philadelphia and Vicinity and the Greater Urban Affairs Coalition, just to name a few, to get things done.

“We need all hands-on deck” she said. “We recognize that some of the issues we will be tackling aren’t new issues. These issues didn’t just pop up yesterday. The violence in Philadelphia, for example, has been on the rise for the last few years.”

“I am very proud of this group of committed individuals, who come from diverse backgrounds and expertise in their field and occupations, took the oath to stand with me on the front lines to get things done,” she added.

That said, Hicks plans to come up with an agenda to address the immediate gunviolence crisis, but which contains fresh ideas about processes like conflict resolution and other means of community engagement at its core, she said.

“Bishop Felton, my first vice president, Melvin Johnakin, my second vice president, and my third vice president, Kamryn Bonds and I are prepared and ready to roll up our sleeves and sit at the table with other organization leaders, to brainstorm and do the work to help turn things around for the better on the streets of Philadelphia,” she said. Bishop J. Louis Felton, senior pastor of Mount Airy Church of God In Christ, was right at home as he took his oath of office as the first vice president .

“The election of new officers for the Philadelphia Branch of the NAACP is a sign of hope for a new season of servant leadership in our community,” he said. “The NAACP is reclaiming its voice at this critical juncture in the history of our nation. The time is now for a new vision and collaborative partnership to address the state of emergency that exists in our community. Together, we are up to the task. We are the change that we so desperately need.”

“I’ve been active with the Prince Hall Masons and with the Philadelphia Graduate chapter of Omega Psi Phi Fraternity for many years,” he said. “I’m also active with my church.  I’ve always kept my NAACP membership active, but I wasn’t up front, doing the work.”

Everyone has a time and season, Johnakin said. It’s time for everyone on the new board to shine, including himself.

“ It’s a great day to be able to step up to the plate and be a part of, and work with, the new administration of the Philadelphia NAACP,” he said.

“We have opportunities in front of us to deliver some needed support for the less fortunate, for those caught up in civil rights situations, racial profiling, standing up for voting rights and more. I am prepared and ready for the task and we want to support Cathy 100%.”

Hicks plans to continue the annual events that  the Philadelphia chapter is known for doing in the coming months, such as health fairs, non-partisan voter registration drives, college fairs, NAACP membership drives, free food giveaways,  the year-round NAACP ACT-SO programming for youth along with other programs geared to youth involvement, as well as their bi-annual candidates forums.

During a live media appearance on the Nick Taliaferro Show on 900AM WURD — her first after Sunday’s installation —  Hicks announced that on July 31, Philadelphia Sheriff Rochelle Bilal and her staff, Mt. Airy Church of God in Christ, along with members of  the NAACP Philadelphia Chapter and a few other organizations, will host a Unity Day event at the Mount Airy Church of God In Christ at 6401 Ogontz Avenue. The event will run from 11:00 a.m.-4:00 p.m.

Hicks said that when people come to the NAACP table, they will have the opportunity to meet some of the newly elected officers and committee board members. They will have registration forms for those who are interested in joining or becoming a volunteer. The membership rates are reasonable — general adult memberships cost $30; general youth memberships cost $15 — and you get the chance to learn how to organize your community to do great things.

For more information about the local chapter, visit: naacpphillybranch.org .

Philadelphia branch of the NAACP prepares for new leadership