The Philadelphia NAACP branch attends a screening of  ‘Loudmouth’ 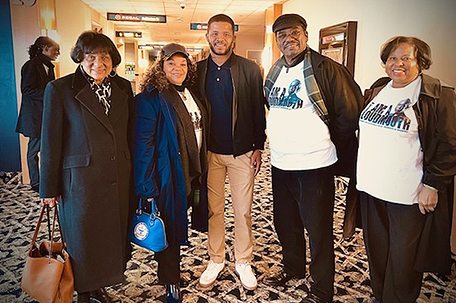 “Loudmouth” — the title alone commands your attention, if not your curiosity.

“Loudmouth” tells the story of the Rev. Al Sharpton, who is the subject of this engrossing documentary, which explores the role of his larger-than-life, sometimes  divisive media persona in his decades of social justice activism.

Youths were present at the screening, so we asked, “Have you ever heard of Rev. Al Sharpton?”  The two we questioned, politely and honestly replied, “No.”  Well, needless to say, after the documentary, they know who Rev. Al Sharpton is now!

“The NAACP Philadelphia Branch is honored to be part of this exclusive documentary of Rev. Al Sharpton’s historic journey of his courageous fight for civil rights and social justice,” said Catherine Hicks, the branch’s president. “The film gave you a jolt of the past, a reminder of our history and for everyone to know how far we have come and unfortunately how much work needs to be done.  The documentary itself speaks to and educates an array of audiences of all ages.”

Here are the perspectives of two young people about the documentary:

Rev. Al Sharpton is a civil rights activist who is the subject of a documentary about the struggles of Black people called “Loudmouth.” Some people love New York City because they think it is an amazing city with amazing findings, but they don’t know the history of it and how the city was divided into two parts; one for whites and Blacks, and about how Black people got killed for just walking in the whites’ neighborhoods. When those Black people got killed, Sharpton decided that enough was enough and started a revolution. He walked two miles, blocking subways, traffic and much more to get what they wanted. In conclusion, New York City wasn’t always a bright city — it was a city that marginalized Black people and was not fair to them.

“Loudmouth” is an educational movie that teaches you about many things about how Black people were not treated fairly. This is a movie that you can show to your younger or older peers. This can be given to people who may think they shouldn’t talk about what’s right. This movie can inspire them to speak up and speak out.

“Loudmouth” is a stunning and very great film with the right history about Al Sharpton. The struggles, violence, and long journey that took place during the Civil Rights Movement. New York is well known for the amazing skyscrapers and famous districts. But, what’s so fascinating about New York is that the city was a very racist place against people of colored skin. People would say things such as, “This is our town!” “These are our streets!” “This is our city” and “You don’t belong here!” These were some of the mean and hateful words that were directed toward Al Sharpton and his people. No one said that changing the world would be an easy job.

There is inspiration that the movie “Loudmouth’’ can give to a lot of people, but it should mainly target young people. What I mean by that is Al Sharpton started young, at the age of 19. This may be shocking to some but, it is very possible to be involved in great matters for a good cause at a young age. This documentary could give kids the confidence to also add more than just making a change to people — they could change the entire world. There is a big impact this movie has on adults, teens, and children of all ages.

In conclusion, “Loudmouth” is a movie that shares great information and history, informing young people that it’s possible to make a change in people and in civil rights.