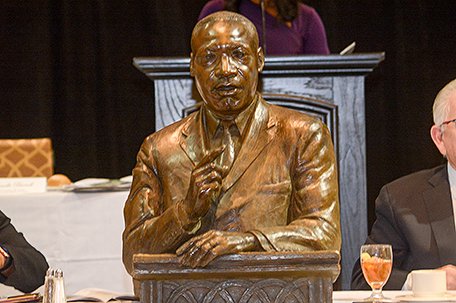 Founded by the late civil rights activist C. DeLores Tucker, the luncheon is the largest one held in King’s honor in the country. Funds raised benefit the MLK Association in Philadelphia and its various programming, such as the annual children’s Christmas dinner party and College For Teens programs.

William Tucker, president and CEO of the Philadelphia MLK Association, continues to carry the torch every year since the passing of his wife in 2005.

“We are serving King’s legacy everyday of the year,” he said. “The main principles of [King’s] legacy was three things — peace, love and nonviolence. But we are witnessing a lot of  in our nation that are the opposite of that. We are witnessing unprecedented hatred, we are witnessing unprecedented evil and just people acting with evil intent. We thought King’s legacy was beginning to penetrate the hearts of people, but we are realizing that there’s people that want to roll back the clock. And King warned us of that; but we have to be eternally vigilant, because democracy is not a given and freedom is something we must be willing to sacrifice for.”

Speakers and awardees spoke of their personal connection to Rev. Martin Luther King Jr., his legacy, his late wife Coretta Scott King, and referenced excerpts from King’s famous speeches and the notable “Letter from a Birmingham Jail.”

“When I think about Dr. King and his legacy, I think of two words,” Casey said during his remarks. “One word is justice and the other word is service. If we’re living up to his legacy, we will continue to fight the battles that we should fight against injustice to advance the cause of justice, and we must continue that fight today. His fight for justice must continue to be our fight here in the United States.”