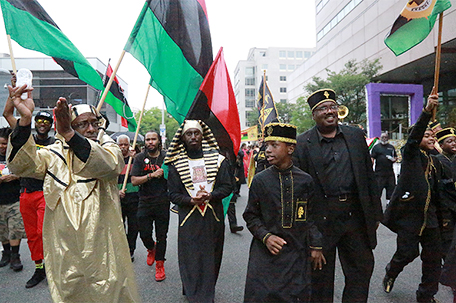 Juneteenth is the oldest celebration of the emancipation of slavery in America. The holiday dates to June 19, 1865, when the enslaved Africans in Texas were freed well after other African Americans won their liberty. Texas declared Juneteenth a state holiday on Jan. 1, 1980 and today many other states recognize or observe Juneteenth as a holiday. Traditions include reading of the Emancipation Proclamation, cookouts, music, skits and speakers encouraging self-development and family values.

In 2017, the Universal Juneteenth Parade and Festival had more than 1,000 participants. In attendance were two kings from Ghana, a United States congressman, two Pennsylvania mayors, state senators, state representatives, the Philadelphia police chief, Prince Hall Masons and a host of councilpersons and dignitaries. Parade participants came from different states along the northeastern coast, from New York City to Washington D.C., to the delight of over 7,000 spectators for the event’s second year.

On Friday, the No Longer Bound “UMOJA”  and Honoring the Ancestor’s Wreath Ceremony.

Over 3,000 marchers are expected to participate, along with 14 floats, bands and a host of community organizations. The parade will step of at 15th and JFK Blvd. The parade reviewing stand will be between 5th and 6th on Market. The parade will be televised by ABC TV6 in its entirety. It will culminate at Penn’s Landing. Philadelphia Juneteenth Music Fest and Parade is now proudly a part of the PECO’s Multicultural Series on Penn’s Landing.