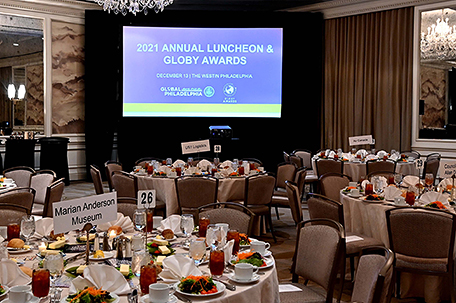 The Philadelphia Global Association recognized six local leaders for their global impact and contributions to the city’s worldwide stature at the 7th annual Globy Awards on Monday.

According to Executive Director Zabeth Teelucksingh, “this group made Philadelphia the nation’s first world heritage city.”

The Globy Awards is a distinguished occasion where outstanding accomplishments with international implications are recognized in four main leadership categories: educational, heritage and preservation, community, and corporate. “Being a global Philadelphia awardee means the world to me,” said Jillian Patricia Pirtle, national Marian Anderson Museum and Historical Society CEO. “The Global Philadelphia Association takes seriously the fact that our cultural and historical institutions need to be preserved and none more importantly, than that of the legacy of our great Marian Anderson and all that she meant to the world, but especially to the city of Philadelphia as an artist, as a humanitarian and as a global leader.”

Pirtle was the recipient of the Heritage and Preservation Leadership Globy Award. She’s also the youngest owner of a National Historical Site in the United States.

“The Globy Awards are an important occasion in our global city to highlight the work of Philadelphians who are engaged in international activities that affect our residents,” stated Teelucksingh.

Philadelphia Water Commissioner Randy E. Hayman accepted the inaugural award for his leadership in the area of sustainable development.

“This opportunity to represent the Philadelphia Water Department as a force for environmentally sustainable policies and planning is a great honor,” states Hayman. “Through leadership and partnering with our fellow city agencies and communities, we are helping to make Philadelphia one of the greenest cities in the nation and doing our part to help the planet.”

Globy honorees were celebrated during a luncheon at the Westin in Center City’s Liberty Place.

Miller is an accomplished attorney who, over the course of a remarkable career, has consistently demonstrated a deeply held commitment to civic involvement.

Other honorees included Loree D. Jones, CEO of Philabundance. Jones was recognized for her accomplishments as a community leader.  Educational Leadership was awarded to Drexel University, John Fry, President, accepted on the university’s behalf. Stephen S. Tang, Ph.D., President and CEO of OraSure took home the Globy for corporate leadership.

The Global Philadelphia Association was founded in 2010 by nine of the leading international organizations in the Greater Philadelphia Region.

It has been incorporated as a member-governed Pennsylvania nonprofit corporation. Today, over 200 organizations, businesses, and internationally-minded individuals have become joint venturers in the Global Philadelphia initiative.

Preserving history in a changing neighborhood