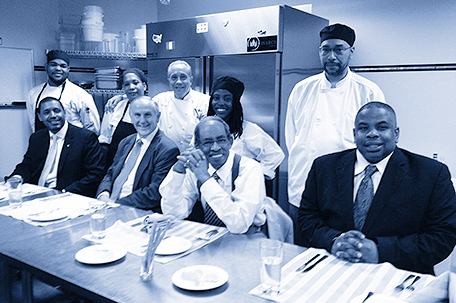 The Philadelphia Foundation today presented grants totaling $41,000 to the Opportunities Industrialization Centers, Inc. (OIC) and its national arm, OIC of America, in recognition of the nonprofit’s 50th Anniversary and National Conference being held in Philadelphia this year. The grants will help promote the nonprofit’s programs and underwrite the creation of marketing materials highlighting OIC’s services available to the community.

R. Andrew Swinney, president of The Philadelphia Foundation, presented the checks at OIC’s offices on Friday morning. A check for $10,000 was presented to Anthony Ross, President of OIC of America, OIC’s national arm, in recognition of its 50th Anniversary and National Conference being held June 12-15, 2014, at the Pennsylvania Convention Center.

Swinney also presented a check for $31,000 to Robert Nelson, President of Philadelphia OIC, to help endorse and sustain existing programs and support the creation of marketing materials to better promote OIC’s services available to the community as well as expansion into new training areas.

Following the check presentations, officials and board members were treated to a special lunch prepared by students in OIC’s Culinary Arts program.

Founded in 1964 by the late Rev. Dr. Leon Sullivan, OIC was created to address the lack of education and job training programs available to minorities in Philadelphia so they may better prepare themselves and become part of a highly-skilled workforce. In Philadelphia, OIC manages the Opportunities Inn, an innovative training institute where students receive hands-on experience as part of their technical education in Front Office, Room Attending, Food Service and Culinary Arts.