The Philadelphia Citizen announces ‘It Pays To Vote’ to encourage turnout 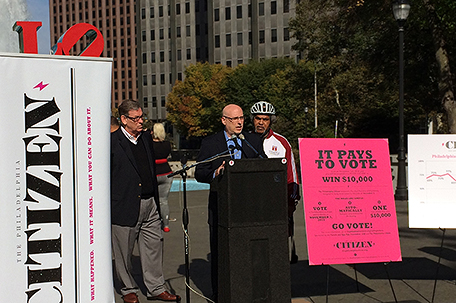 ABOVE PHOTO:  Larry Platt (center, at podium), co-founder and editor of The Philadelphia Citizen, announced the ‘It Pays to Vote’ initiative, a lottery in which $10,000 will be awarded to a randomly-selected individual who votes in Philadelphia on November 3rd. The project was designed to increase voter turnout on Election Day and encourage citizens to become more actively involved in the civic life of Philadelphia. Platt was joined by former Mayor of Philadelphia John F. Street (right), and Sam Katz (left), former Mayoral candidate and documentarian, for the announcement which took place at Love Park.

Local media group will award $10,000 to a Philadelphia resident who votes on Election Day

The announcement was made at a press conference in Love Park today by a group of civic leaders and advocates including former Philadelphia Mayor John F. Street and Sam Katz.

“We recognize that we are in a civic crisis when it comes to voter turnout and something has to be done,” said Larry Platt, Co-Founder and Editor of The Philadelphia Citizen. “As a result, we are launching an innovative project designed to increase voter turnout in Philadelphia, a city where 73 percent of registered voters did not even show up to vote in the 2015 Mayoral primary election. Through the voter lottery we hope more people will come out to vote on November 3rd.”

The $10,000 cash prize award is being funded by a grant from the Pamela and Ajay Raju Foundation. Ajay Raju, CEO and Chairman of the Dilworth Paxson law firm, is also the co-founder of the Philadelphia Citizen.   According to business lawyer and elections law expert Kevin Greenberg of the Flaster Greenberg law firm, state election law allows for such a lottery because no effort will be made to influence the outcome of the vote.

The idea for the lottery came from a similar initiative in Los Angeles designed to increase voter participation in a local school board race which at the time had received little publicity. The Southwest Voter Registration Education Project (SVREP), a non-profit charitable organization dedicated to increasing voter participation, launched “Votería” – a play on the Spanish word for lottery, “lotería” – in which it offered a cash prize to increase the participation in the election. The unorthodox approach was successful in that it helped increase voter turnout and also created awareness on elections without violating electoral laws already in place.

“In addition to encouraging voter turnout, the Philadelphia Citizen wants to be a resource for voters by providing nonpartisan information on local races and issues,” said Platt. “For instance, while the Mayoral race has gotten considerable attention this year, there are also two Council-at-Large races, and some judge races that are taking place as well. We want to raise awareness of all the races so voters are well prepared when they get to the polls.”

The November 3rd ballot will also contain a city bond question and two referendums on amendments to the Philadelphia City Charter. The first would create an Office of Lesbian, Gay, Bisexual and Transgender (LGBT) Affairs; the second would reorganize the city’s planning, zoning, housing and development functions under a new Department of Planning and Development.

Among the local voter statistics available on The Philadelphia Citizen website are:

·  8.1 percent of Philadelphians describe themselves as active in their neighborhoods (31st of the top 50 cities)