The Persistence of Resistance 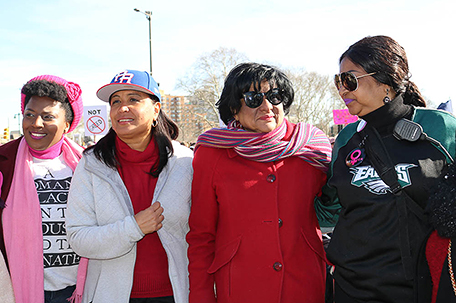 On the first anniversary of Donald Trump’s Inauguration as President, women in Philadelphia took to the streets to let him know they’re not taking their eyes off of him.

The next day, thousands of women in cities around the world, including Philadelphia, took to the streets to let the Trump Administration know that not only were they going to keep an eye on him, they were going to resist his attempts to return to a time when marginalized communities lived in fear.

On Saturday, thousands of women — and the men who support them — took to the Benjamin Franklin Parkway to remind the Trump Administration that they’re still watching him…and that some would be doing it from his new backyard.

While many of the people there were attending the march as a means of reminding Trump (and themselves) of what the first year of the president’s administration has been like, some were there to showcase the results of some of the activism that has been generated since last year. 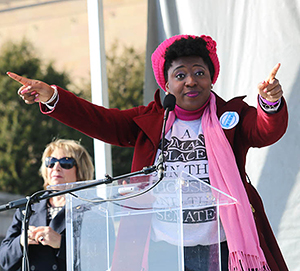 After a year that can only be described as tumultuous, seeing the sea of people lining the Parkway showed that people are still paying attention to issues of social justice and equality, said Emily Cooper Morse, one of the march’s organizers.

“I’m not surprised at the turnout, but yes, I’m very happy,” she said. “This is almost like a brainstorming session because we’re still dealing with a lot of the same issues.”

It was also a time of rededication to issues like equal pay for equal work, reproductive freedom, and the right to not be hassled by law enforcement or sexually assaulted.

“I think it’s time to stand up and be counted again, and to stand up for truth and justice, equality and peace,” said Dot French, who attended last year’s march. “We’re making our voices heard again.”

It was also a chance for organizers to showcase lessons learned over the last year.

For example, more women are trying their hand at running for public office. According to the organization Emily’s List, an organization that encourages women to run for office through financing and support, the Trump presidency has inspired about 25,000 women to take their shot at elected office.

Many of the women currently holding public office in Philadelphia and representing the city in the state house in Harrisburg made their voices heard at the march. Newly-elected City Controller Rebecca Rhynhart spoke, as did State Reps. Donna Bullock and Joanna McClintock. Councilwomen Jannie Blackwell, Cherelle Parker, Maria Quinones-Sanchez got together as a group to speak. 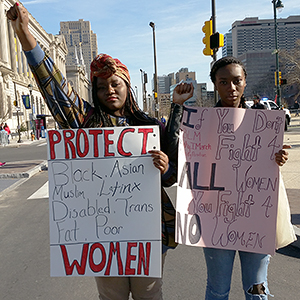 Sisters Cherisse (left) and Autumn Richardson were inspired by Saturday’s march, and plan to become more involved with the issues they care about.
(Photo: Amy V. Simmons )

During their time, Councilwomen Quinones-Sanchez and Parker reminded the audience that the issues of their sisters in marginalized communities are more complicated than many of the issues that brought them to the Parkway.

“You can’t be the leader of the free world and treat American citizens the way that you’re treating the people in Puerto Rico and the U.S. Virgin Islands,” said Quinones-Sanchez, who had just returned from her native Puerto Rico and told the story of not only the people on that island, but that of the 4,000 residents of the Virgin Islands who came there seeking help from Hurricanes Irma and Maria, only to find themselves in more dire straits due to governmental inaction.

“You cannot be a part of this movement and say “me too” or “time’s up” if you’re not also talking about criminal justice reform,” Parker said. “It will never be enough until all of us are equal.”

For Morse, one of the organizers, that was one of the things that hit home. Last year’s march was criticized by many for being, well, a little White. Because 54 percent of White women voted for Trump, women from marginalized communities — most notably the African -American, Latinx and LGBTQ women who came out in droves for Democratic presidential candidate Hillary Clinton — thought that centering them and them alone in the movement wasn’t good; especially since the battle that these women and their sisters with disabilities is two-pronged.

“We talk about women not being equal, but women aren’t even seen as equal to each other,” Morse said. “If we’re going to obtain equality, we have to do it for everyone.”

But they couldn’t be a part of the discussion if they weren’t brought to the table. Getting them there would require the help of people these women could trust. 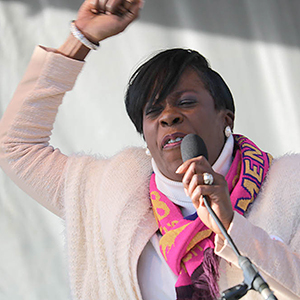 “They reached out to us because while they wanted more participation,” said Salima Susswell, another organizer for the march. “By adding us to the team, they were able to engage with the community.”

“They wanted a march that was inclusive of all women,” said Nikki Bagby, another organizer. “What inspired me to do this was my children. I have three daughters. They mean a lot to me, and I want to protect their rights.”

Toward that end, the power of the vote and how women in office can help everyone concerned was a recurring topic on Saturday. It was the first day of the government shutdown brought on by Congress’s inability to come together and pass a continuing budget resolution to fund the government. The shutdown lasted until Monday, but might become an issue again on Feb. 8, when Congress will find itself over this same budget barrel.

The budget concerns and how they manifest themselves for young people brought Cherisse and Autumn Richardson to the march. This was their first time participating in something like this, and they were there because, as Councilwoman Parker put it, “The power of the people is greater than the people in power.”

And the best way to manifest that power is by going to the polls.

“As women, we have to get out the vote,” Autumn said. “If we want to see change, we have to be that change. If we just stay silent, like they said, time’s up. We don’t have any more time.”