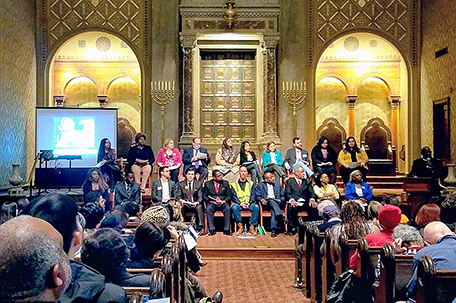 Eighteen candidates for City Council At-Large heard from a variety of community groups espousing their individual causes at The People’s Forum.

Usually, a political forum is a place where the people who are running for office talk to the people whose votes they’re trying to gain about why they should give them a chance.

At the People’s Forum held at Congregation Rodeph Shalom last Sunday, the voters got the chance to reverse things a little bit and tell 18 of the 37 candidates for City Council At-Large what they wanted from the next seven people to hold those seats.

Robbins and Singletary have since been dropped from the ballot due to problems with financial paperwork and, in the case of Singletary, a criminal conviction that led to federal jail time.

Co-sponsored by the Alliance For A Just Philadelphia, a coalition of community groups advocating for a variety of issues — ranging from criminal justice reform, to better schools and an end to poverty and gun violence, and the MLK D.A.R.E. coalition, an interfaith organization committed to many of those same issues — the People’s Forum focused on the People’s Platform For A Just Philadelphia, a progressive policy document that these groups believe should be at the center of the 2019 elections.

Because a lot of Philadelphians feel Iike their government isn’t listening to them, the forum was set up to let these voices take center stage.

“The rich and powerful among us, when they see something they don’t like, they make a phone call,” said the Rev. Mark Kelly Tyler, who co-moderated the forum with Miss Dee-Dee, a member of several of the community groups sponsoring the event. “We pick up the phone and call 311 and we stay on hold forever. The pothole we complained about months ago is still there, and the only way that those of us in this room can change this city is we realize that none of our organizations are powerful enough to do it by ourselves. We have to work together in concert. When the City of Philadelphia speaks in one voice, things begin to change.”

Those unified voices came to the podium in small groups representing the coalition’s members and asked questions of the candidates that the group then answered by holding up signs that said “yes” or “no”.

Miss Dee-Dee told the audience to make sure they paid close attention to how the candidates used these signs.

“Pay attention, because not all of the candidates are answering all of the questions,” she said. “Keep that in mind for the primaries.”

While most of the questions were easy for many in the group to say “yes” to, because wanting such things as better schools, less crime in the streets and better jobs for everyone, some wound up being controversial for a few of the candidates.

For example, when the subject of safe injection sites came up, most of the candidates expressed support for them, but two of them, one of them Baylor, said no.

When the candidates were able to explain themselves a little more thoroughly in a brief lightning round, Baylor explained her concerns.

“I support safe injection sites, but I also want to be supportive of my neighbors,” she said.

For Domb, the subject that gave people cause centered on two areas: the end of the 10-year-tax abatement and a moratorium on development.

To see the People’s Platform for a Just Philadelphia, go to: www.ajustphiladelphia.org.