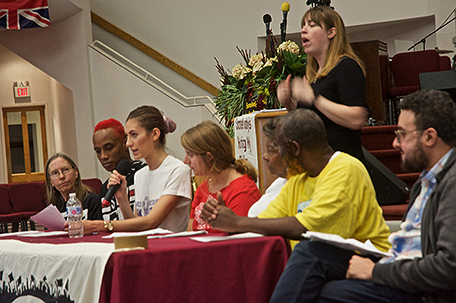 ABOVE PHOTO: Rachel Murphy tells her story during the hearing as her fellow panelists listen. (Photo courtesy of PA Poor People’s Campaign)

Recently, around 100 advocates, activists and others gathered in New Covenant Church’s main sanctuary, not just to commiserate, but to collaborate and to hear the stories of Philadelphia’s poor.

The hearing was the first of its kind held in Philadelphia since the group staged its first nonviolent direct action event in 2018. Philadelphia faces significant challenges when it comes to poverty and the hardships surrounding it. According to the U.S. Census 5 Year ACS estimate, nearly one in five Philadelphians live at or below the federal poverty level.

The hearing provided an opportunity for representatives from various advocacy groups — most of whom are experiencing the effects of poverty themselves on a regular basis — to tell the attendees about their individual life stories and their work.

There are several areas of concern — similar to those instituted during the first  Poor People’s Campaign spearheaded by Dr. Martin Luther King, Jr. — that serve as campaign guideposts when it comes to addressing crucial issues affecting modern society — systematic racism, poverty, the war economy, ecological destruction, and building unity across lines of division.

Dzurinko began the hearing with statistics specific to Philadelphia which were compiled by the PA Poor People’s Campaign Political Education Team from a number of reliable sources such as the US Census, USDA,  and the PA General Assistance Fund. They include the fact that:

— Philadelphia ranks 67 out of 67 on health outcomes

— 33% of its residents receive Medicaid

— One out of three Philadelphias receive some form of SNAP benefits

Panelist Pat Albright  of the Every Mother is a Working Mother Network is a disabled single parent. She spoke about the lasting damage for the welfare reform efforts of the Clinton administration in the mid-90s and about the impact of the elimination of general assistance(GA) on Philadelphia’s poor who rely on it.

An affordable housing crisis in the city

Jamaal Henderson of ACT UP Philadelphia, a single parent of five who is currently disabled, is concerned about the devastating effect that gentrification and development is having on Philadelphia’s low income, long term residents in his neighborhood and throughout the city, and the lack of affordable housing for those displaced by it.

“Gentrification is destroying my community, “ he said.

The environment, race and big business

During his presentation, Richard McCants of PhillyThrive told attendees that the recently closed PES Refinery has been the largest contributor to air pollution in Philadelphia. Many of the long time residents nearby suffer with respiratory illnesses or cancer as a result.

These conditions — in addition to unsafe conditions at the refinery — existed for years as the company ignored the concerns raised by the community. Most of those residents are either Black or brown.

Mass incarceration and poverty in Philadelphia

Sandra Hill of the Coalition to Abolish Death By Incarceration — who is best known in the community as Nan — would like to see the major changes made in both the city and state’s mass incarceration system. Her experience with the system includes both family and community members and as a mentor, particularly to one special young man named Robert. In spite of serving a life sentence, she inspired him to complete his education and become a mentor himself.

Other speakers included Rachel Murphy, one of the March on Harrisburg coordinators, was diagnosed with multiple sclerosis when she was a college student and had to leave school two years later and who was left with substantial student loan debt.

Dr. Karim Nathan and intern Clarissa O’Conor of Put People First! PA  also spoke to the attendees about the impact Hahnemann Hospital closure on the city’s poor and what needs to happen going forward to help this vulnerable population.

A call to action

At the end of the hearing, attendees — who hailed from Philadelphia, different parts of the state, the country and the world —  were invited to ask questions or call attention to the organizations they are involved with themselves.

A representative of one of those organizations was Sara Callaway of the Women of  Colour Women’s Strike organization in London, England. She has been following the Poor People’s Campaign events in the US, and  is one of those responsible for organizing a related action in the halls of Parliament.

The effect of years of austerity measures and impending uncertainty surrounding Brexit has had the greatest impact on Black women in the UK, she said.

Bob, a long time member of the Brandywine Peace Movement, was in the audience when Dr. Martin Luther King officially came out against the Vietnam War during the historic speech he delivered at New York City’s Riverside Church in 1967. He spoke about his concerns surrounding modern militarism, especially the use of drones.

Many in attendance were eager to become more involved with the campaign, which is a coalition of groups rather than an established organization itself.

The PA Poor People’s Campaign will be participating in the next mass event — the Mass Poor People’s Assembly and Moral March on Washington — which will take place on June 20, 2020, as well as holding other hearings, meetings and activities around the state. For more information, visit: www.poorpeoplescampaign.org.