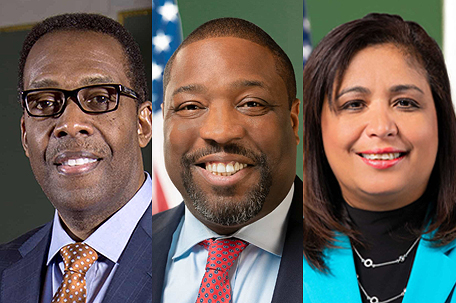 After weeks of negotiation, Philadelphia City Council and Mayor Jim Kenney came to an agreement on a $5.25 billion pact.

For weeks, Mayor Jim Kenney and Philadelphia City Council had been going back and forth to try and come up with a Fiscal Year 2022 budget that would make everyone as happy as possible.

On Thursday, Council passed a $5.2 billion spending plan that includes more money for violence prevention, affordable housing, police reform and even the arts.

Unlike budgets past, this spending pact almost led to Council having to start its summer recess later than planned due to a disagreement on how the city should spend the $1.4 billion it received in federal American Rescue Plan monies, especially as it pertains to the city’s gun violence problem and its seemingly intractable poverty rate.

Kenney wanted to add $18 million to the city’s anti-violence efforts. The original budget also included reductions in the city’s wage tax, and other tax cuts designed to attract suburbanites working from home due to the COVID-19 pandemic back to Philadelphia.

But Council had other ideas.

“We promised at the start of this budget process that whatever we did collectively would be focused on investing in the people of Philadelphia and dealing with the significant racial and economic disparities revealed by the pandemic,” Council President Darrell Clarke said.

And thanks to $400 million in funds set aside for preserving neighborhoods, job creation and creating affordable housing and $155 million toward what’s being called the Philly Peace Budget, there’s light at the end of both tunnels, Clarke said.

“We have much more work to do, but this budget agreement keeps that promise,” he said. The issue about which Council spoke the loudest — and with a force that included a letter to the Mayor’s office from a veto-proof majority of council members — was the Philly Peace Budget. Under this budget, $49 million would go to community groups that provide such services as trauma counseling and children’s services. About $500,000 of that money would also be made available to groups in the form of targeted grants.

While this budget addresses the city’s rising rates of violence, it does so by investing in things including the Free Library of Philadelphia, summer programs for children and curfew centers.

The city had reached a point where the city needed to put its money where its mouth is when it comes to gun violence, Councilmember Kenyatta Johnson (D- 2nd Dist.) said.

“We have reached an emergency status when it comes to gun violence and all Philadelphians must work together to create a short-term and long-term plan to address this senseless gun violence,” said Johnson, the chair of Council’s Special Committee on Gun Violence. “I want to thank all members of City Council for working together to make the Philly PEACE Budget a reality, especially the hard work of Council President Darrell Clarke. I also want to thank Mayor Kenney for his support of the Philly PEACE Budget.”

Under the $400 million Neighborhood Preservation Initiative, thousands of units of affordable housing would be constructed, repair grants would be created for homeowners who want to fix up their properties to access, and the Philadelphia Eviction Prevention Program and the Philadelphia Land Bank would get $3 million and $6.5 million respectively.

Council’s Poverty Action Plan would get a $20 million investment and the new Citizens Police Oversight commission would get $2.1 million to start its work. There’s also an additional $7 million for arts and culture programs in the budget.

But getting to this place wasn’t easy. Council and the Mayor were at odds over spending and tax cuts up until last Thursday evening, when it was announced that a deal had been reached. Council then reconvened the Committee of the Whole meeting to send the budget bills over for an initial reading.

The initial reading was held at around 11pm. Had that not happened, Council would have had a special meeting next Thursday to finish budget business.

While it wasn’t easy, getting more money into the budget to make some real and necessary changes was really important, Councilmember Maria Quinones Sanchez (D-7th Dist.), chair of Council’s appropriations committee, said.

“Establishing new priorities and opportunities requires a realignment of our budget.  I believe this budget sets a different tone for how we want to invest in people and assure a more equitable recovery,” she said.