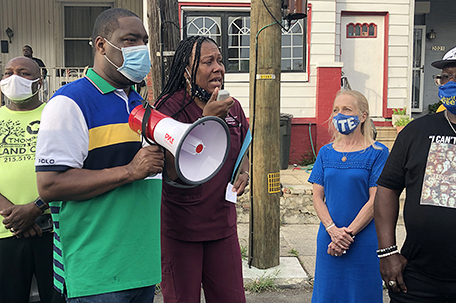 Even when the coronavirus has run its course in Philadelphia, the pandemic of gun violence is something that the city is going to be dealing with.

Before she even took the megaphone at the Peace Not Guns march in Southwest Philadelphia on Wednesday night, you could feel the anguish coming from LaTonya Bond.

She was trying her best to hold back the tears as Councilmember Kenyatta Johnson (D-2nd Dist.) brought up speakers from community groups fighting the violence, U.S. Rep. Mary Gay Scanlon (D-5th Dist.) and former City Councilmember Jannie Blackwell to try and encourage people to take back their streets.

But when Bond was given the floor, the pain, the tears and the anguish that comes from being the mother of a murdered son came rushing out. Bond’s son, Lamont Smith, was 21 when he was shot and killed 10 years ago.

“This is all I have left,” Bond said, holding a picture of her son. “I have a picture. I have memories. I have a granddaughter without a father and this hurts. This hurts. It’s been 10 years, but it feels like yesterday. Whenever I hear gunshots, I wonder what mother is going to have to bury her child. What mother is going to have to feel that pain that I wouldn’t wish on anybody. This hurts and this pain doesn’t go away.”

Bond was one of the many people, including Councilmember Johnson himself, that have been directly impacted by gun violence. Marching and organizing have led to good results in the area of gun violence in the past, so taking to the streets makes sense, he said.

He’s hoping that the effort will be citywide.

“It was good to see people from other parts of the city here,” Johnson said. “We need to organize and strategize to address this issue. We have to keep marching and keep working, because we can’t get to the point where this is seen as normal.”

This week’s march ended at the 6000 block of Reinhart Street in Southwest Philadelphia, where two people have been lost to gun violence this year. The previous week’s march was a tour of various sites in a small section of South Philadelphia where several young people had been shot and killed.

Because of this, the word often gets on the street that something’s about to happen before it actually does. That’s the place where the people in the neighborhood could do the most good, Johnson said.

Statement from Council President Darrell L. Clarke on gun violence in Philadelphia over the holiday weekend