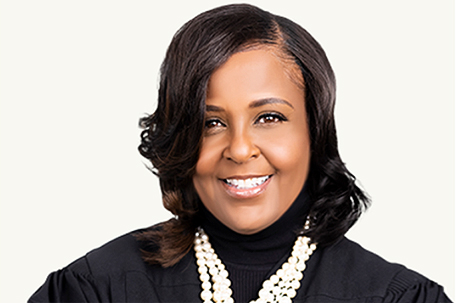 Judge Lori Dumas is hoping to take what she’s learned in the Court of Common Pleas to Commonwealth Court.

When she was appointed back in 1985, Judge Doris Smith-Ribner became the first Black woman to serve on Pennsylvania’s Commonwealth Court.

Two years later, Smith-Ribner was elected to a full 10-year term to the court and served for 22 years, retiring in 2009 to run for the United States Senate.

While the current nine-member body has six women on it, none of them are women of color. In fact, the court is completely white and Republicans hold a 7-2 majority.

“There have been no people of color on the court for the last 10 years,” she said. “In this time of racial injustice and inequality as it relates to our marginalized populations, Black women are stepping up to the plate to make the kind of impact that I know we’re qualified to make.”

Dumas is one of three Black women running in the Democratic primary for a seat on Commonwealth Court. Judge Sierra Thomas Street and Judge Amanda Green-Hawkins are the other two who have made it onto the ballot.

After serving 18 years on the Court of Common Pleas, most of them in Family Court, Dumas decided to run for Commonwealth Court because she believes her expertise is just what the court needs now. From education and the environment to voting rights, the court needs someone who can bring a fresh set of eyes to the court, she said.

“There were several issues that really prompted me to do it and do it now,” Dumas said. “After almost 20 years on the Common Pleas bench, I wondered what my next step would be in terms of being able to impact the lives of children through the educational system and the educational system, the lives of everyday workers through labor cases and the air we breathe through environmental cases. With all of the different areas of the law that I’ve worked with, I can now see the whole picture. Being on the Commonwealth Court would give me an opportunity to utilize all of the skills I have gained and honed over the years. It would bring them all together under one roof.”

It’s also an important time for diverse representation because of an issue that came up during the 2020 election: the process of voting. After watching former President Donald Trump and his Republican party partisans attempt to use the courts to nullify the votes of Pennsylvanians, Dumas believes that having someone at the table representing the communities most impacted by those attempts is crucial.

Especially since most of those attempts to nullify the vote in Pennsylvania were aimed at one place: Philadelphia.

“It was eye opening,” she said. “Unfortunately, not enough people on this side of the state have paid enough attention to the courts, although their decisions impact our day to day lives.”

Because this is a statewide race, the challenge that Dumas faces is getting the people she thinks will vote for her to the polls, something that continues to be a challenge due to the continued COVID-19 pandemic.

But she believes she’s up to it, and despite this being an off-year election, she thinks turnout will exceed expectations.

“Democrats in particular are still fired up and ready to use all of their energy and their votes to ensure that our democratic principles are able to continue. I think that the last four years were a wake-up call for all of us in Pennsylvania. Local elections are very important. The actions on this local level will have far more impact our day-to-day lives than what’s going on in Washington.”