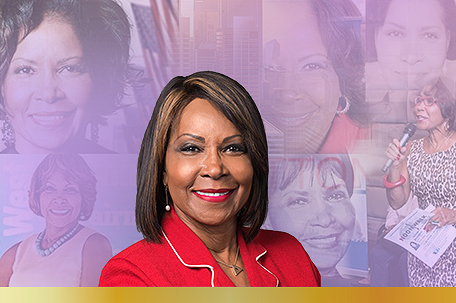 As she leaves Philadelphia City Council after 20 years, Councilwoman Blondell Reynolds Brown says she’s looking forward to the next stage of her life.

After she ended the meeting of Philadelphia City Council —- after making the motion to adjourn as she always does —-  Councilwoman Blondell Reynolds Brown is sitting at a table in an office filled with binders of things still on her plate.

While the weekly meeting of the City’s legislative body might be over, the Councilwoman’s day isn’t. And as those who have called her “boss” in the past will tell you, that’s no accident, said Haniyyah Sharpe Brown, who served as Reynolds Brown’s communications manager before becoming director of advocacy and external communications for the School District of Philadelphia.

“What she says about you can’t outwork her is the truth,” Brown said. “Working with her was like going to graduate school for public policy. You got to see how things work, and she showed you that you sometimes have to come to the table multiple times and work together. She always expected excellence.”

Councilwoman Reynolds Brown attended her last City Council meeting as both majority whip and at-large member on Thursday, ending a 20-year career of passing legislation that did everything from helping your home become more energy efficient to making the Philadelphia Eagles Super Bowl championship work for your kids, to making sure you know how much sodium is in that Big Mac you’re about to eat.

The road that Reynolds Brown took to City Council started, literally, on her block.

She had just moved back to the block she grew up on in Mantua when she noticed that there was a graffiti problem.

A suggestion from her friend Tim Spencer, who went on to become the first executive director of the Anti-Graffiti Network before his death in 1996, led to the beginning of track one of Reynolds Brown’s career.

“Tim Spencer told me that I needed to talk to the Ward Leader,” she said. “The Ward Leader made me the committee person.”

The second track began with wanting to get involve in the Democratic National Convention. Potential delegates have to get to know all of the elected officials in their Congressional District. Among the people she met was then-State Rep. Chaka Fattah, who she would later go on to work for when he became a State Senator.

It was while she was there that Reynolds Brown realized that the people whose issues were most important to her weren’t being heard and why.

“There were 50 senators,” she said. “Forty-six of them didn’t look like you and me. Only two were African American, and two were women. That showed me what happens when you don’t have people to advocate for the issues of women and children at the table. If you aren’t at the table, you’re probably on the menu. And being on the menu isn’t in your best interest.”

She decided to run for City Council At-Large. It seemed like the best way that she could do the most good, Reynolds Brown said.

In her first campaign for City Council in 1995, she learned that being a campaign volunteer, which she had been for at least 12 campaigns, and being the candidate were two different things.

“When you’re the candidate, there’s an entirely new level of responsibility, preparation and surprises,” Reynolds Brown said. “Clearly, I hadn’t raised enough money and while I was prepared from a policy perspective, it takes more than being a policy wonk to run for office.”

But when Council races commenced in 1999, she had a 3-year-old daughter, Brielle Autumn Brown. She also had $250,000 in campaign funding, and endorsements from labor and women’s groups. It was a strategy that helped her win the seat, she said.

It has also led to her biggest challenge, which was being a parent while also working for the people as a City Councilperson. And it’s a constant one.

“Being a parent that is present at all times, that challenge never goes away,” Reynolds Brown said. “And, I’ve had to help members of my staff, and quite frankly, sometimes the public, understand that my first, second and third responsibility was always to my daughter. My work is what I do, it’s not who I am. And so, I did all I needed to to honor my role as a mom because I recognized that I had only one chance to get that right.”

While she knew a lot about the legislative process by working in Harrisburg, Reynolds Brown didn’t realize just how important it was to be able to count to nine and all the horse trading that sometimes plays a part in it until she walked on the Council floor, she said.

This ability to be able to get legislation passed led to what Reynolds Brown believes is her greatest achievement: creating the Children’s Fund. The fund, which was formed 15 yers ago as part of a deal to get Lincoln Financial Field and Citizens Bank Park built, required the Philadelphia Phillies and the Philadelphia Eagles to give the city $1 million a year for 30 years.

The first 15 has come and gone. But there’s still 15 left, and the City’s children will benefit from that, Reynolds Brown said.

“This was a big deal,” she said. “And we were the second city ini the country to achieve that. We had the ball. They wanted the stadiums built and we wanted something for kids. I’m thankful that I had the coaching of then-Mayor John Street and his chief of staff George Burrell who shared my vision with that and coached me.”

Part of the reason that the effort to create the Children’s Fund was so successful was because Street and Burrell were willing to help a freshman Councilwoman do something that was important to her.

When Reynolds Brown decided to leave council back in January, it was a decision that caught a lot of people by surprise because, well, incumbents don’t generally leave. But for much of her time on Council, she’s been planning for her exit by honoring and exposing the next generation of leaders. Two of those future leaders —- Cindy Bass and Maria Quinones Sanchez —- have gone on to be council people themselves.

At a time when young people are demanding their moment in the political sun with a forcefulness that sometimes borders on anger, this made Reynolds Brown stand out, Sharpe Brown said.

“She was one of the only people who has done legacy building right,” Sharpe Brown said. “She believes in passing the torch.”

Another one of the future leaders honored by Reynolds Brown’s office will be moving back into that office in January when the occupant of the loft office on City Hall’s fourth floor when Katherine Gilmore Richardson becomes one of three new At-Large City Councilpersons joining the body.

When Reynolds Brown made the decision to leave Council, Gilmore Richardson was one of the first people she told of her decision. The new Council will be getting someone who is not only prepared to lead, but is inspired to do good things for the city she calls home.

“I’ve watched [Gilmore Richardson] grow into a very knowledgeable young woman who understands what government looks like because she’s lived it,” Reynolds Brown said. “When you work up close and personal with an elected official, which I have twice, and you get the chance to see what’s required to make a difference in people’s lives, it can be contagious. Because there really is an adrenaline rush and there’s a great sense of satisfaction when you get a law passed that’s really going to change people’s lives. And so I understand her inspiration because I was inspired by working for Senator [Vincent] Hughes and Senator Fattah.”

As someone who has literally grown up around the Councilwoman, Gilmore Richardson says she intends to follow the example set by a woman who has kept up with her since that meeting at Girls High and has served as a guide to her even as she prepares to carry the torch.

“I hope that I’m able to mentor someone the way she mentored me,” Gilmore Richardson said. “I didn’t know when she came and spoke to our class at Girls High that I would be assuming her seat 20 years later. Working with her was a real learning experience.”

.Reynolds Brown hasn’t made any decisions yet about what she’s going to do once she finishes her last term on City Council.

But while she hasn’t ruled out continuing to work in a governmental space, a return to non-profit work isn’t something she’s interested in because she’s already done that, Reynolds Brown said. She’s also not going to run Philadanco, the company for which she used to dance and still supports, because like being in City Council while actively raising a child, it’s what she describes as a “nine day a week job.”

There’s things she’ll miss about City Council, Reynolds Brown says. The camaraderie that comes with working with a group of like-minded people to solve the city’s problems. The rush that comes with passing legislation.

But there’s some other challenges she wants to take on. And continuing to be a member of City Council makes taking those challenges on difficult.

“I’m leaving office at a perfect time for me,” Reynolds Brown said. “For my Fourth Act, I really want to do some other things. And I cannot pursue those other interests and realize some other aspirations I have while being center stage at City Council.”

The Friends of Blondell will be holding an event to celebrate the Councilwoman’s career.

The Legacy Experience Celebration will be held on Friday, Jan. 31, 2020 at the Suzanne Roberts Theater, 480 S. Broad Street. The event will include a cocktail reception, and her final Olde School Dance Party.

Tickets are $100 for the reception and dance party and $50 for just the dance party. For more information and to purchase tickets, contact [email protected] or call 215-851-1858.