The newest hire at CCPTV, Sikemi Williams, takes home a Mid-Atlantic Regional Emmy Award for her work on ‘Strange College’, a hit show 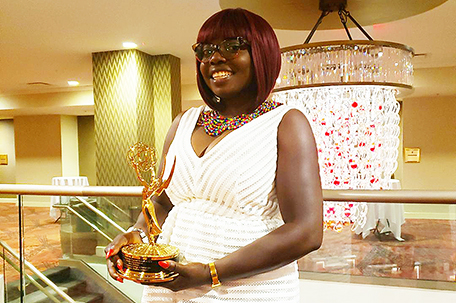 Williams joined Community College of Philadelphia as a part-time employee about a year ago, and recently was hired to work full-time.

“Winning an Emmy still feels so surreal,” she said. “I am so excited, grateful and very happy to have won in the Graphics/Animation category. Having worked in creating content all my life, winning this Emmy is like a pat on the back for the many years of hard work on the job.”

“The staff and crew of CCPTV are proud of Sikemi and proud that this show met the high level of excellence required to obtain this accolade,” Allan Kobernick, CCP’s director of Multimedia Services, said.

“Strange College,” written by assistant professor Frank Fritz, produced and directed by Allan Kobernick, is its first fiction program produced and filmed on the CCP campus. To date, the program has won more than 10 accolades, including inclusions in international film festivals, and awards for its score.

Beating the odds grad finds the support needed to juggle family and work, and make it through college