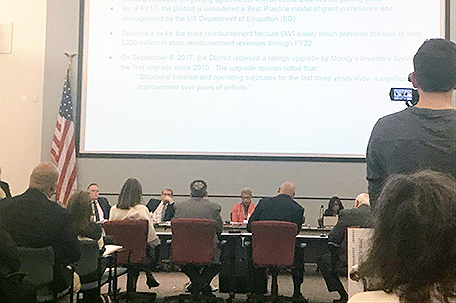 The School Reform Commission has voted to put itself out of business. Now the fun really starts.

Last Thursday, the School Reform Commission decided that it might be time for the School District of Philadelphia to have the first and last word on its affairs.

By a vote of 3-1-1, the SRC voted to dissolve, ending the School District’s 16-year experience of being overseen by the group of recalcitrant 4-year-olds in Harrisburg that have treated it like an unwanted toy.

In a move that surprised no one, former SRC Chair Bill “I never met a teacher’s union I didn’t want to break” Green voted no. the Commissioner Farah Jimenez was the abstention, citing concerns about next steps.

I say this because there is a lot that the district is going to have to negotiate before the corks can be officially popped. And even then, things are still going to be a tad sticky.

Before the School District was given to the group of recalcitrant 4-year-olds that’s been running it for the last 16 years, it was, thanks to a change in the City Charter, run by the Mayor.

Once the SRC’s dissolution becomes official, the School District’s governance reverts back to that. Under Mayor Jim Kenney’s plan, a 13-member oversight board would give him 27 names.

He would pick nine people, who would go to City Council for confirmation and approval. If any of the nine didn’t meet Council’s approval, another name would be selected until the board was filled.

Since Councilmanic oversight isn’t in the City Charter, a charter change will be necessary. The earliest that could happen is in May. The new board, however, has to be in place by March so that they can learn the ropes.

While that’s what the City Charter mandates, and all City Council is inclined to do right now, activists want something else.

They want the Charter changed to create an elected school board.

Be careful what you wish for. You just might get it.

I’ve covered elected school boards and in a city that has trouble convincing people that voting for Mayor is  actively important, this isn’t going to go the way they think it will.

Maybe I’m just jaded, but I can’t see this rush of non-activist parents suddenly taking to the polls and putting in school board members who will remember who put them there. Folks may prove me wrong, but I don’t know.

But the people pushing for this are kinda committed to it, so they’re pushing for a ballot question to find out the public’s thoughts. My feeling is, sure. We can do that. But we have to be  honest with people about exactly what they’re inviting into their school district.

Besides, I’m not 100 percent sure the School District is going to return to local control.

You see, the Secretary of Education has to go along with this. When the School District was taken over, it was considered distressed, meaning that it was lacking a valid budget and an educational program in compliance with state laws.

The argument can be made that at least financially, the District is still sending SOS signals. Since Paul Vallas became the district’s first CEO back in 2001, leaving the district in a $70+ million hole, the hole has steadily grown. While the district is in the black this year, it’s looking at a $905 million deficit in 2022.

Despite State Sen. Vincent Hughes’s promise that he will continue to hold the Commonwealth’s feet to the fire as the Democratic chair of the Appropriations Committee, I can’t help but think that the State Legislature will let this happen so that they can let themselves off the hook while sticking a city with a 26 percent poverty rate with the bill.

So while there’s a lot to be happy about with the SRC’s decision, there’s also a lot of unanswered questions.

The answers will come in the New Year. Let’s hope they’re productive for the sake of our kids.