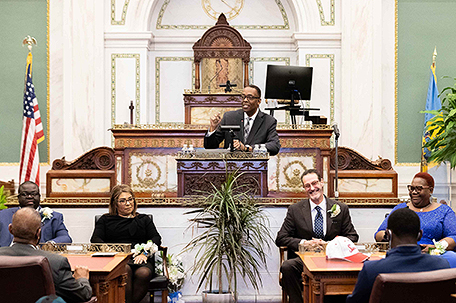 While there wasn’t the usual level of pomp and circumstance, the swearing-in of four new Philadelphia City Council members was still a spirited affair.

While he didn’t officially become a City Councilmember until Monday, Anthony Phillips, the new representative for the Ninth Councilmanic District has been busy acclimating himself to his new job.

There are little things that he says will be coming together in the coming weeks. Things like setting up his office, hiring staff and getting the lay of the land in a new system that can sometimes be daunting.

But when it comes to the big things, like what the residents of the Ninth District need to improve their quality of life, Phillips plans to hit the ground running.

“But most importantly,” Phillips continued, “they want people to serve them. When they have an issue or concern, they want folks to be responsive and expeditious with that response.”

Those Council members all left in September to enter the 2023 mayor’s race, leaving Council with only 13 members to do its work. With budget season approaching, that made November’s special elections necessary.

Having a new group of people to work with in City government might appear to be a daunting task, but because all of the new Councilmembers have experience in City Hall, it probably won’t be that tough, Council President Darrell Clarke said.

Besides, as long as the focus remains on what’s best for the City, everything will work out fine, Clarke said.

“We have a time-honored tradition,” he said. “We focus on issues of the city of Philadelphia, particularly those residents that most need us to pass policy and legislation. We have a significant agenda. So, at the end of the day, I’m excited. We’re looking forward to getting them sworn in. And as I promised them, there will be a stack of work on their desk next week.”

The new Council members were installed in the city’s legislative body in front of a packed Council Chamber filled with family, friends, and well-wishers. The audience cheered as each member was sworn in and promised to do their best for the city’s residents.

Lozada, who served her new district as chief of staff for Quinones Sanchez before running for the seat, thanked the residents for believing in her.

“To the residents of the Seventh Councilmanic District, thank you for your vote of confidence,” she said. “I promise to work hard, and I’m committed to working with our government and our public safety officials to improve our quality of life, with the school district to ensure that our children have safe spaces to learn, and for teachers to have the necessary resources to provide successful academic journeys.”

Before becoming a councilperson, Vaughn was the chief of staff for Green and had worked in City Hall for more than 30 years. She promised to use her knowledge of city government and utilize it in a way that benefits everyone.

“I’m hoping that we can have a lot of camaraderie, and that we will work together on the issues so that we can make the city a better place to live,” Vaughn said.

Following the ceremony, the third and fifth floors of City Council played host to receptions that featured music, dancing, and food.

But on Thursday, the work began, something that Clarke appreciated.

“We can spread the work out,” he said.