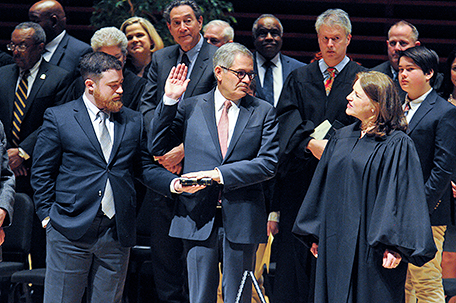 After a political year that can only be described as tumultuous, the relatively calm Inaugural ceremonies that ended with City Controller Rebecca Rhynhart and District Attorney Larry Krasner were a welcome beginning to Philadelphia’s political new year.

Along with 26 Municipal Court and Court of Common Pleas justices — a group that includes former State Rep. Mark Cohen — the new Controller and District Attorney were sworn in as part of a sedate and relatively short ceremony at the Kimmel Center’s Verizon Hall on Monday.

Rhynhart makes history as the city’s first female Controller. Prior to winning the Democratic primary — and thus the office — from incumbent Alan Butkovitz, she was City Treasurer and Budget Director in Mayor Michael Nutter’s administration and Chief Administrative Officer under current Mayor Jim Kenney. 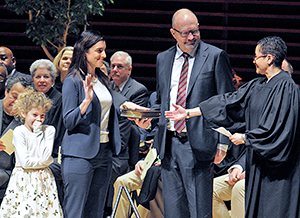 The Honorable Rebecca Rhynart is sworn in as Philadelphia’s new City Controller by Judge Carolyn Nichols with her daughter Julia and fiance’ Dave McDuff looking on. (Photo: Bill Z. Foster)

Sworn in by Superior Court Justice Carolyn Nichols and flanked by her fiancée Dave McDuff and daughter Julia Bright, Rhynhart took the oath for her new office and pledged to help City Government be more responsible to its citizens by making sure that it’s using its resources in the best way possible.

“We need to show the people of Philadelphia that our leaders will be as good as the citizens here,” Rhynhart said. “The people want more from their government. They deserve it.”

Toward that end, Rhynhart promised to use her power as Controller to comb through city agencies in search of waste, look at how City funds are used and whether it’s the best way to use them, and to join Auditor General Eugene DiPasquale in his efforts to make sure that the Philadelphia Parking Authority finally fulfills its financial responsibility to the School District of Philadelphia.

Krasner touched on the need for more school funding in his inauguration speech.

Declaring this the swearing in of a “movement,” Krasner, a career defense attorney who replaces interim District Attorney Kelley Hodge, vowed to make the justice system more just.

“This movement has taken an oath to remember that in the City of Brotherly Love and Sisterly Affection we are all family,” he said. “We all deserve protection. We deserve support and help and second chances.”

Toward that end, Krasner, who was sworn in by his wife, Court of Common Pleas Judge Lisa Rau with his son Nathan by his side (and his other son Caleb watching via streaming video from the West Coast), has promised to “trade jails and death row for schools,” improve police/community relations, and make it safer for witnesses to testify, ensuring justice for all.

Krasner’s inauguration closes out a chapter in the District Attorney’s office’s history that began with the indictment of former District Attorney R. Seth Williams on corruption charges. Williams is currently serving a five-year service in Federal prison.

But it also began a new one as Black Lives Matter Pennsylvania activists staged a protest at the Inauguration demanding that Krasner make a statement regarding the police shooting of Dennis Plowden Jr. in East Germantown last week.