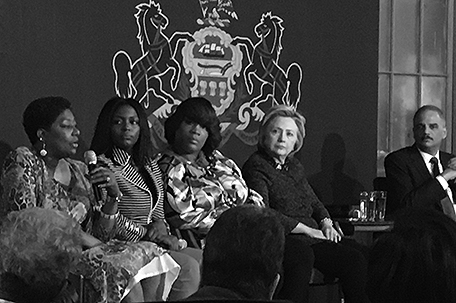 At an event in a North Philadelphia church, Democratic Presidential Candidate Hillary Clinton spent a lot of time listening to a group of women who know all too well about the consequences of police brutality and gun violence.

For the other three women joining former Attorney General Eric Holder and Democratic Presidential Candidate Hillary Clinton at the St. Paul Baptist Church in North Philadelphia on Wednesday, the choice to endorse the former Secretary of State in her presidential bid had already been made.

The fourth woman, Tanya Brown Dickerson, hadn’t yet decided whom she was supporting in the April 26 Pennsylvania Primary, but she was there because a discussion of gun violence and criminal justice reform in Philadelphia wouldn’t have been complete without her, said the Rev. Mark Tyler, the pastor of Mother Bethel A.M.E. Church and moderator for the discussion.

In December 2014, Brandon Tate-Brown was driving down Frankford Avenue near Magee in a Dodge Charger he had borrowed from his job at a car rental place. Philadelphia Police Officer Nicholas Carrelli pulled the car over, saying that it’s lights weren’t on, a struggle ensured, and Carelli, who told police investigators that he saw the butt of a gun in the car, shot Tate-Brown in the head.

The fight to hold Carelli accountable for her son’s death has been uphill, Brown Dickerson said. Philadelphia District Attorney Seth Williams didn’t question Carrelli. No charges were filed. No one, including former Mayor Michael Nutter and former Police Commissioner Charles Ramsey would tell her anything about what happened.

“The police hurt me by taking my baby,” Brown Dickerson said. “The Constitution says ‘We the People’, not ‘We the FOP’. If I do something like this, I’m held accountable. They should be too.”

She wanted to talk to Clinton mother-to-mother. Sure, the other women on the panel—Geneva Reed Veal, Nicole Bell and Marie Hamilton—were able to tell her how the Democratic frontrunner reached out to them after losing their loved ones Sandra Bland, Sean Bell and Dontre Hamilton, but she wanted to see it for herself.

“Is she a mother?” Brown Dickerson said. “Can she understand what I’m going through? After talking to [Clinton], I think we’ve got a winner.”

The room was filled with representatives from groups including Mothers In Charge, Moms Demand Action, Cease Fire Pennsylvania, and other anti-violence groups wanting to find out what a Clinton administration would do in the areas of gun violence and criminal justice reform.

While the Obama Administration has started to make reforms to such things as the sentencing difference between sentences for crack vs. powdered cocaine, there’s still a lot left to do, Clinton admitted. She’s been dogged on the campaign trail by Black Lives Matter protestors and others who have been impacted by the 1994 Crime Bill, which was signed into law by her husband, President Bill Clinton.

To solve the problems of gun violence and mass incarceration, we have to do some soul searching, Clinton said.

First, we have to admit that the system is broken.

“We have to be honest about the systemic racism in the criminal justice system,” Clinton said. “That’s not just the responsibility of those of us in public office, it’s all of us. People aren’t being treated equally and we have to end these disparities.”

Secondly, we have to admit that it might be time to address how easy it is to get a gun and the problems that ease causes. In one weekend, 12 people were shot in Philadelphia, including a 4-year-old child, were victims of gun violence and that makes no sense, Clinton said.

“There’s been a lot of talk in this election about the power of certain special interests in this country, but there is no more powerful lobby than the Gun Lobby,” she said. “We need to develop a national consensus and do much more to prevent violence.”

To most of the women on the panel, Clinton had proven that she was the best person to lead this conversation on the national level by the simple act of reaching out to them after they had lost their loved ones.

Polls show that the Black community is divided generationally between Clinton and her opponent, Sen. Bernie Sanders, due to issues like criminal justice. These women came to try and bridge that divide.

“I decided to support Hillary because she supported us,” Nicole Bell said. ”Before we knew what our next steps were, we got a call from her.”

“Hillary’s people reached out and met with me and 11 other families in Chicago,” Geneva Reed Veal said. “She sat down with us, went around the table and talked with us. What was supposed to be a 30-minute meeting ended up lasting two hours.”

Clinton promised to honor their support should she become president.

“These women want all of us to stand with them,” she said. “I’ll do that. And I want you to hold me accountable for it.”

Following the discussion with the mothers, Clinton headed to the Fillmore concert hall in Fishtown for a rally with supporters.