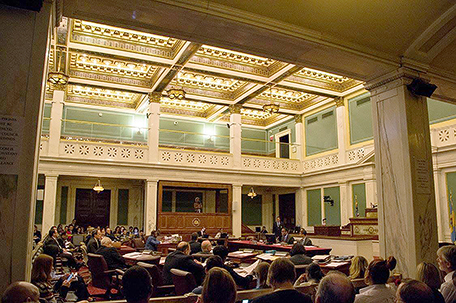 With the end of the fiscal year barreling toward them, Mayor Jim Kenney and Philadelphia City Council are still trying to agree on a budget.

For the second week in a row, Philadelphia City Council’s Committee of the Whole met to vote out the bills connected to the city’s budget, which must be passed by June 30 to be considered active for the fiscal year beginning July 1.

And for the second week in a row, the body recessed the meeting due to a dispute over how the $1.4 billion in American Rescue Plan money the city received from the federal government should be spent. At press time, there was no word on when the body would meet again to consider the budget bills.

On Monday, the Committee met just long enough to say that it wouldn’t be considering the $5.18 billion proposed budget and tax bills needed to pay for it wouldn’t be considered that day. When the Committee met again on Tuesday, the only bill sent to Council with a favorable recommendation was a bill allowing the purchase of tasers for the Philadelphia Police Department from Axon Enterprises. That bill was passed by a 15-2 vote, with Councilmembers Helen Gym and Isaiah Thomas voting no.

For the last two weeks, Kenney and Council have been duking it out, mostly over tax cuts and the amount of additional money that should go into solving the city’s gun violence problem. Kenney proposed $18 million in additional funding, while Council has said — loudly — that $100 million makes more sense.

In a letter sent to Kenney on June 4, a veto-proof majority — 13 of the 17 members of Council — let him know they wanted $100 million in anti-violence funding included in the final budget. The bulk of this money — $45 million — would go toward playgrounds and libraries while $15 million apiece would go to community-based intervention, job training and investment programs.

“Homicide is the leading cause of death among Black men aged 15-24,” the letter said. “Over 800 youth have been shot since January 2020. Gun violence is everywhere, but most of it is concentrated in a handful of disinvested, Black and Brown communities. Such unprecedented violence demands an unprecedented response.”

Trying to keep all the balls in the air is Council President Darrell Clarke, who had also proposed his own violence prevention and anti-poverty agenda at a press conference held at a North Philadelphia job training program.

In order to pass the budget by Council’s last scheduled meeting on June 24, the bills must be read at two consecutive council meetings. This means that the first reading had to be done by Thursday for Council to avoid having to hold a special hearing to pass the City’s budget.