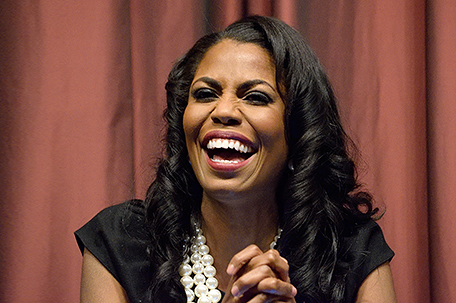 There aren’t a whole lot of people in politics who are better known by just one name, but Omarosa Manigault is one of them.

While she’s best known for her participation on Trump’s reality show, “The Apprentice”, Manigault has a political background. Before becoming Trump’s liaison to the Black community, Manigault was a board member of the National Diversity Coalition for Trump. She also spent some time in the Clinton Administration, working for Vice President Al Gore and the Commerce Department.

Manigault was in town last week to open a campaign office on South Street for the Trump campaign. In a brief interview with the SUN, she talked about her work with the campaign, her plans for reaching out to Black voters, and why Trump might not be completely wrong when he talks about the issues befalling Black neighborhoods.

SUN: Thank you so much for your time today, Omarosa. I understand that you’re in the area to open up a new campaign office. As the Trump campaign’s Director of African American Outreach, what kind of response have you and by extention the campaign, been getting here in Philadelphia area?

OM: We’ve brought the campaign to Philadelphia and we think we’re getting a great response.   The Democrats have been taking the African American vote for granted. Traditionally, Republicans haven’t gone after this vote, but Donald Trump is. And he’ll get it because Donald Trump is about getting things done.

SUN: I have to be honest with you. I get that this is the message you’re trying to send, but for many of my readers, that’s not the message that the Trump campaign is sending. Many of them feel insulted by remarks that Trump has made about the African American community. How do you get past that?

OM: I think we get past that by asking “Are you better off than you were seven years ago?” There are a lot of bad things going on in the African American community and it’s unacceptable. Philadelphians have been impacted by the influx of guns and drugs. Trump has gone into places like Chicago, where a bus driver was shot and almost killed while he was driving. I’m from Youngstown, Ohio, and we have guns and drugs and gangs there. There’s poverty and despair in Black communties. What have Democrats like Hillary Clinton, Barack Obama and Rahm Emanuel done for Black people?

SUN: Most of America connects you to Donald Trump through your appearances on “The Apprentice”…

OM: That was 13 years ago! I’ve done a lot of work with the National Coalition for Diversity and that’s how I got this position. It was because I was so successful with that…have you done your research…?

SUN: I know that this was 13 years ago, ma’am, but the reason I’m asking this question is because I wanted to know if was your personal connection to Donald Trump that made you take on this job and how important do you think what you’re doing is for African Americans in the long run?

OM: I’m doing this because I think that anytime African Americans or any other group votes for one party 90 percent of the time, you’re going to get taken for granted. We need to be at all of the tables. We need to make sure that the voices of Black people are heard. That’s important. It’s political suicide not to do that.

SUN: Thank you so much for your time.