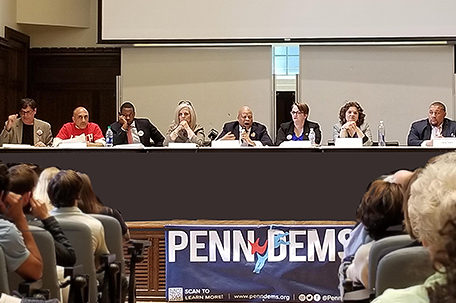 The League of Women Voters and the Penn Democrats organization hosted a City Commissioner Candidate Forum on April 23 at The ARCH, which is located on the University of Pennsylvania’s campus. The forum — moderated by Philadelphia Inquirer voting rights reporter Jonathan Lai — tackled topics related to the duties of the office, such as election oversight, assuring voter access, civic engagement, and increasing voter participation, among other things.

Eight of the 14 candidates participated in the event.

Three city commissioners are elected every four years. The majority party can only hold two of those seats, while the third must go to a minority party, third party or independent candidate. Candidates must be at least 25 years old, a resident of the city for three years and a US citizen.

Lai asked the panel for a show of hands regarding some of the election reforms that have been proposed. All the candidates agreed that the electoral process was long overdue for an overhaul, and that this overhaul should include options such as early voting opportunities, automatic registration, same day registration, and open primaries. None were in favor of a fully mail in ballot process.

They also agreed that it was time to transition from the traditional “Mr. Horn and Hardart” coffee can lottery system of ballot position assignment to a randomized selection process utilizing modern technology.

When asked to define what they felt was the greatest threat to electoral integrity, answers ranged from increasing the amount and quality of poll worker training to wholesale reform of the commissioner’s office itself.

“It has been easier to spread misinformation than accurate information,” she said. “I’m working on getting voter guides on our website which will give voters information on who’s running for office and a little bit about them.”

Marwan Kreidie did not mince words when answering the same question.

“We have one commissioner that doesn’t show up to work, a real disgrace,” he said.

Kreidie went on to cite the controversial new voting machines and the selection process in general as equally problematic.

“The machines — that cost twice as much as we had budgeted — [are] machines that are not safe from hacking, and we don’t have the proper paper trail,” he said.

“If you go into the Black and Brown communities and you ask them today ‘when is Election Day?’, nine out of 10 people are going to tell you that they don’t know when Election Day is,” Omar Sabir said. “People died for our right to vote; that’s why it’s important to let people know that the more you vote, the more you get, and that you count.”

The candidates were asked about how they would increase accessibility for disabled voters.

Moira Bohannon said that the fact that fewer than 20% of Philadelphia’s polling places are ADA compliant needs to be addressed, while Sabir said that assistance with transportation and early voting would make a significance difference with this group of voters, as well as empathy.

Dennis Lee stated that problems surrounding transportation and logistics need to be addressed, suggesting that a mobile polling place program may provide a solution to this.

Khalil Williams pointed to the need for a formal election-focused civics curriculum for middle and high school students to familiarize them with the process.

Luigi Borda — who is a teacher — basically agreed, pointing to just such a program he designed called “Philly Civics 101.” He also supports lowering the voting age to 16 and believes that all students should be given the opportunity to vote at least once before they turn 18.

The candidates were asked to state what they felt was the number one obstacle to voter turnout.

Sabir said that many of people don’t believe in the system and strategic community outreach is needed to build that trust, and that approaching potential voters in a nonjudgmental, respectful manner would go a long way in that regard.

“There’s a lot of people in Philadelphia that don’t even realize [that] they have a vote,” Jen Devor said. “There’s a lot of misconceptions about criminal convictions, about homelessness. We need to make sure that every eligible Philadelphian that can vote knows that they can.”

The internet plays a huge role in the modern voter education process. Several candidates drew attention to the inaccessibility and drawbacks of the current City Commissioner’s website and pledged to help make it more user friendly it if elected.

As a city with an international population, it is important that issues surrounding language barriers and voting are prioritized. Part of addressing these barriers is recognizing the plethora of languages spoken here beyond English and Spanish.

The candidates were asked about how they would improve this process. Answers ranged from making better use of the current materials on hand in the office to direct community outreach to help identify where problems exist.

Sabir pointed to recruiting more poll workers from community members who speak the same languages, while Kreidie stated that even though he appreciates the work of volunteers who assist non- English speaking citizens at the polls, he would like to see professional translators hired for that task.

The primary election takes place on Tuesday, May 21. For more information, visit: www.philadelphiavotes.com.