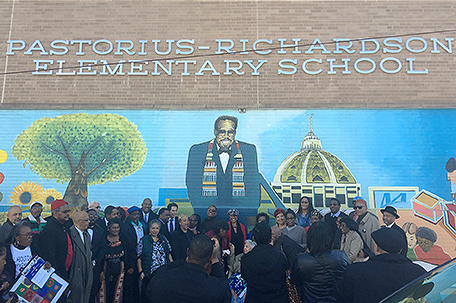 The memory of the late State Rep. David P. Richardson, Jr. continues to reverberate through the Germantown community he served.

On Tuesday, October 30, a ceremony was held to officially change the name of the Mastery Charter Francis D. Pastorius Elementary School, to the Pastorius-Richardson Elementary. 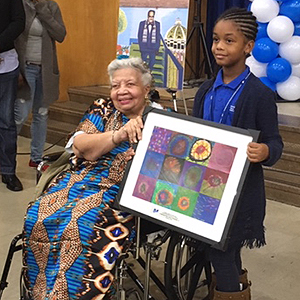 Ms. Elaine Richardson accepts a gift from one of the Pastorius-Richardson fourth grade students of artwork dedicated to her son’s memory. (Photo courtesy: Arlene Edmonds)

The school is located at Sprague St. and Chelten Avenue/David P. Richardson Boulevard in Germantown.

In addition to the Richardson mural that was rededicated in 2013 on the exterior of the school, a new five-foot portrait of the former lawmaker was also unveiled in the school’s hallway after the renaming ceremony.

The program was moderated by State Rep. Stephen Kinsey, who now holds Richardson’s former seat. Kinsey  spoke about how Richardson was an inspiration to him while growing up in Germantown. 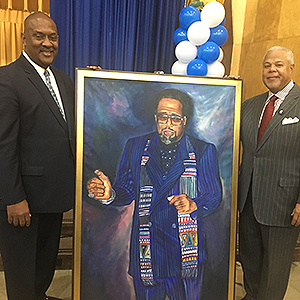 “I stood in awe of David Richardson,” Kinsey said. “He was known throughout the community. I would like to thank all the elected officials for being here. I want to thank Scott Gordon from the Mastery Charter School. This (dedication) has been a journey. Long live the legacy of the Honorable David P. Richardson, Jr.”

Elaine Richardson, the mother of the late state legislator, delivered remarks during the ceremony. She also accepted artwork dedicated to her son’s memory from a 4th grade student at the school.

“This is just overwhelming,” she said. “I am so appreciative of the work you have done to honor David, my son. He worked very hard and tirelessly to achieve what has been done. I thank all those who are here today…“I know what went on behind the scenes…That is why I appreciate the work that everyone has done.” 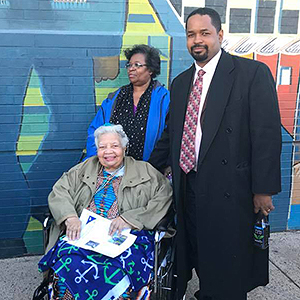 Richardson also shared memories of when former mayor Ed Rendell renamed Chelten Avenue after her son. She mentioned that during these times all must remember “to hope and pray and trust in God” while working actively for the betterment of the local community.

Rep. Kinsey then invited the family, elected officials, and those who were closely associated with Richardson to come to the front for the portrait unveiling.

As he started to rip the brown sawmill paper on the portrait, former Richardson chief of staff, Yvonne Thompson-Friend, pointed out the portrait was upside-down.

Kinsey paused the program to flip it right side up as the crowd burst into spontaneous applause and cheers. 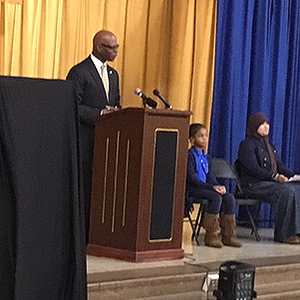 “This was an amazing and well-deserved honor,” said Mildred Jackson of Germantown. “I didn’t know him personally, but I certainly knew of him. His reputation preceded him. He got those liens removed the homes of those on assistance.

He brought resources to the community. He stood up for the people. For those of us in Germantown, he was our lion of Zion.”

The Pastorius Richardson School is a K-8 charter school and has a current enrollment of 600 students. It became a Mastery Charter School in 2013.

Since 2015, it has doubled the school’s PSSA scores in mathematics. Besides the required academic subjects, the school also offers its students art, foreign languages, music and physical education.

Among the school’s extracurricular activities are martial arts, dance, robotics, art, and cooking. Additionally, those in grades 6 to 8 can engage in track, football, basketball, and other athletic programs. For more information, visit masterycharter.org.