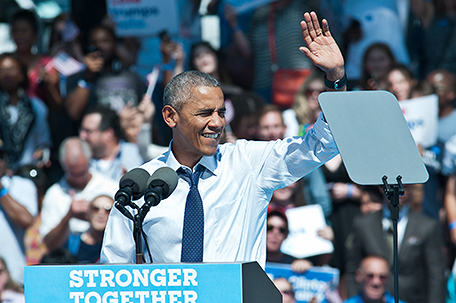 ABOVE PHOTO:  President Barack Obama visited Philadelphia last week to campaign for Hillary Clinton for President; and is met with adoring, but sad crowds who wish he could serve a third term. (Photo by Bill Z. Foster)

On what will probably be his last visit to Philadelphia as President of the United States, Barack Obama asked Philadelphians to show Democratic Presidential Candidate Hillary Clinton some love.

Sure, they’ll vote for Hillary Clinton in November. They like her and even admire the fact that she didn’t let a little thing like having pneumonia keep her from working, just like they and other women all over the country do every day.

But you’ll have to forgive Michelle Clark of South Philadelphia, Jacqueline Grant of East Oak Lane and Wendy McLean of Upper Darby if they wished they had another choice.

“We’re saying goodbye to the best president ever,” McLean said. “I wish he could stay for four more years.”

“I kind of teared up when he ended his speech,” Grant said.

In what will probably be one of his last appearances in the City of Philadelphia as President of the United States, Obama came to Eakins Oval to thank Philadelphians for their support and to ask that they show the same love to Clinton in her presidential run.

“Even though I’ve run my last campaign, I’m going to work as hard as I can to elected Hillary Clinton the next president of the United States,” Obama said. “I need you to work as hard for her as you did for me.“

Before President Obama took the stage, Pennsylvania Gov. Tom Wolf talked about the responsibility Pennsylvania in general and Philadelphia in particular when voters go to the polls on Nov. 8.

As one of 15 so-called “swing states”, Pennsylvania, literally, has the world on its shoulders, Wolf said.

“Pennsylvania has the fate of the world in it’s hands. Not just the country, the entire world,” Wolf said. “If we don’t elect Hillary Clinton and [Democratic Vice Presidential candidate] Tim Kaine, all of the good things that President Obama has done for the country and the world would have gone to waste.”

Obama picked up that theme in his speech, touting the role that Clinton played as Secretary of State in his first term and how it’ll in a speech that highlighted his accomplishments in office, the part that Clinton played in them, and how handing the keys to the nation to Republican Presidential candidate Donald Trump could lead to the country going backward at top speed.

“And the choice that you make, that we make just eight weeks from today will determine the direction of this country for a long time,” he continued. “And I’ve already said this, this is not a choice, this is not the usual choice between parties and policies and left and right. This is more fundamental. This is a fundamental choice about who we are as a people. This is a choice about the very meaning of America.”

Considering the rough primary fight that Obama and Clinton had in 2008, a fight that included charges of racism leveled against Clinton and her husband, former President Bill Clinton, it might appear surprising to some that that the President is working the campaign trail for his former Secretary of State.

But Obama’s committed to passing the baton to her because he thinks she’s the right woman for the job.

She also has a better understanding of the job than her opponent, Republican Presidential candidate Donald Trump, Obama said. World leaders who have seen her in action are wondering—aloud—what the problem is, he said.

“Look, I just came from overseas,” Obama said. “Talk to the other leaders around the world; they don’t even understand how this is close. This is not reality TV. Democracy is not a spectator sport. You don’t tweet in your vote. America is not about ‘Yes He Will,’ it’s about ‘Yes We Can.”

But while he’s with her, and wants others to be with her too, those attending the rally talked about how much they’d miss him.

For many of the audience, the high that came from having a Black family in the White House is one that’s hard to let go.

“[President Obama] was inspirational to me,” said Monica Huff of Northeast Philadelphia. “I come from Texas, so this was special to me. I’m a little melancholy, but I’m glad that I got to see him.”

The 2016 Presidential Election will be held on Nov. 8. The last day to register to vote in Pennsylvania is Oct. 11.