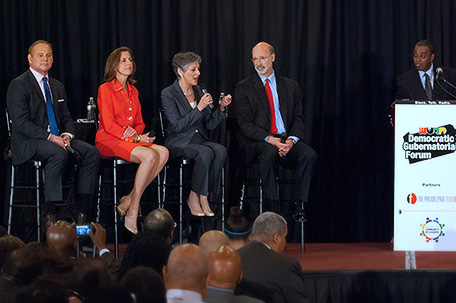 In a final attempt to get their message out to as many voters as possible before Election Day, the four remaining Democratic Gubernatorial candidates spent a day in West Philadelphia pointing out their differences.

You couldn’t blame the four Democrats vying for the right to take on Republican Gov. Tom Corbett in the fall if they were really tired of West Philadelphia by the end of the day on Monday.

With Wolf maintaining a double-digit lead over the field despite ads from McCord and Schwartz questioning his ability to lead, Monday’s events represented the last chance anyone would have to bring down the front runner.

And while McGinty stuck to the issues, McCord and Schwartz took their shots.

First up, the candidates met at a forum held at the First District Plaza building. Sponsored by 900-AM WURD, the Philadelphia Association of Black Journalists, the Community of Leaders and the Philadelphia Tribune, this forum was set up to talk about issues impacting the African American community.

While the candidates all felt that education was the key to getting things in the community on track, their answers included other things.

“I think that economic security is the most important issue,” McCord said. “We must focus on education. It’s morally mandated and it’s also smart. Early childhood education is important and the biggest yield of investment is in poor communities. In poor communities, kids go to Kindergarten with a 30 million-word deficit. Deficits like this lead to a path that ends with kids dropping out.”

But a good education isn’t possible without restoring the funding that Harrisburg has taken away, McGinty said. The cuts have caused the Commonwealth’s educational system to stratify, she said.

When the money is restored to education, fixing that will be easier, McGinty said.

“What we see in the Commonwealth is re-segregation,” she said. “There’s a concentration of racism and poverty that can’t be tolerated. The $1 billion that [Gov. Tom] Corbett took from education has to be put back. The cuts have had a magnified impact on Philadelphia and the chances of getting a good education in a crowded classroom are slim to none. We need a dedicated funding source.”

Wolf, who has been answering charges of insensitivity to racism due to his association with former Mayor of York Charles Robertson, said we can’t fix the problems within the African American community until we admit they exist and that racism plays a part in some of them.

Schwartz put the Commonwealth on notice.

“We need to get serious,” she said. “Poor kids need more help, not less. We must have a sustained commitment.

While all of the candidates promised to get that extra education funding to struggling school districts like Philadelphia’s, the bottom line is that while the governor’s office could change, the Pennsylvania legislature, dominated by Republicans who never met a tax increase they didn’t want to kill, probably won’t.

So how do you get them to agree? The candidates opted for optimism.

“You do it by not squandering the political will that we have right now,” McGinty said. “You get parents to act as citizen ambassadors. You harness that force.”

“I have a record of getting funding for education,” Schwartz said. “I can work with Harrisburg.”

“I can tell people why education funding is important and that we fund it because we care,” Wolf said. “The City of York is suffering the same types of problems.”

“Vision without execution is hallucination,” he said. “I have worked across the aisle. I’m willing to fight for what I believe in. It’s more about compelling than selling. I’ll get it done.”

According to the polls, about 39 percent of all Democratic voters around the Commonwealth are still undecided on a candidate, many of them young voters.

For them, the perception of being able to keep your promises is what’s going to be important. The ability to deliver is what people are looking for, said Patrick Edouard of Olney.

“I’m at a point where I’m not partial to any political party,” he said. “It all comes back to them doing what they say they’ll be able to do.”

Another Candidates debate was held later that evening at Drexel University.