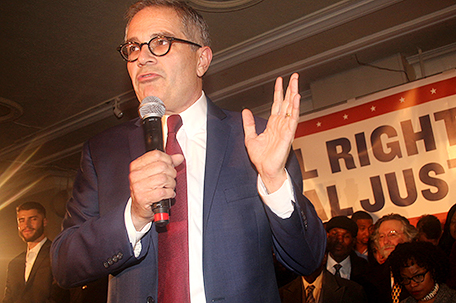 ABOVE PHOTO:  Larry Krasner celebrates his victory in his election as the new district attorney in Philadelphia held at the William Way LGBT Community Center on Tuesday November 7th.   (Photo: Robert Mendelsohn)

After a tumultuous period for the District Attorney’s Office, DA Elect Larry Krasner hopes to restore some balance to the force.

For most of the last two years, Philadelphians have had to deal with the spectre of a District Attorney who spent more time at the defense table on charges of bribery and corruption than he did prosecuting cases.

But on Tuesday, Philadelphia’s voters decided that Democratic nominee Larry Krasner was the best person to make them forget all that and made him the city’s next District Attorney.

In an election focused on criminal justice that spotlighted many of the city’s divisions when it comes to that subject, Krasner — a defense attorney best known for representing protest groups including Black Lives Matter and ACT-UP — bested Beth Grossman, the Republican candidate and former Assistant District Attorney, by a 3-to-1 margin.

Campaigning on a progressive wave that included promises to end cash bail, provide more programs designed to keep people out of jail, and an emphasis on connecting at-risk communities to the jobs and education that will keep them from interacting with the criminal justice system, Krasner has a lot of things on his plate.

His election is proof that this is the approach to criminal justice that Philadelphians want, Krasner said.

“This is a movement,” he said. “And it’s not going away. There’s going to be a radical change in the District Attorney’s office.”

To facilitate that change, Krasner is going to be looking for assistant District Attorneys and other staff through his website, KrasnerTransition.com.

But for his rapt supporters at the William Way center, the changes can’t come fast enough. Many of them were from groups that help prisoners trying to re-enter society after spending time in prison. Others were the family and/or friends of people who had been killed in police shootings.

Others were there because they wanted to see the man whom they hope would wash out the stench of corruption in the District Attorney’s office. Two weeks ago, R. Seth Williams, the city’s first African-American DA, was sentenced to five years in Federal prison for bribery and corruption.

Before the returns came in, hope was in the air.

“I talked to my friends and family about the issues,” said Emma Tramble, founder of the voter participation group “My Family Votes.”  “I think he’s going to win.” 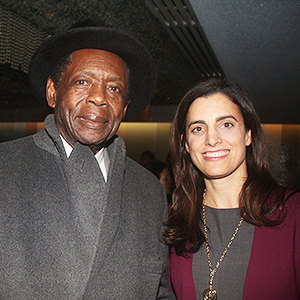 But once Krasner’s win was announced, it was joined by a demand for accountability.

“I’m optimistic about what he’s going to do in the office,” said Camille Turner, of Reclaim Philadelphia, an activist organization that canvassed for Krasner. “We organized behind him. But now, the real work begins. We’re going to keep him accountable. We’re going to knock on his door and hold him to what he’s said.”

While Krasner was the most noteworthy newcomer in to enter City government, he wasn’t the only one. In January, Rebecca Rhynhart will be sworn in as the first woman to hold the City Controller’s office.

Rhynhart barely broke a sweat in defeating Republican Mike Tomlinson for the office. The former city treasurer and budget director got a whopping 83 percent of the vote, which was 66 percentage points higher than her opponent.

When she bested incumbent Controller Alan Butkovitz in the May primary, it was seen as a chance to make the office not just one that points out a city department’s financial problems, but also helps those departments solve them.

As she prepares to take on audits on everything from the Parking Authority to the Controller’s Office itself, Rhynhart promised to do just that.

“I have traveled across the city, meeting with voters and hearing their concerns, and the overwhelming message to me was that Philadelphians want a government that works for them,” Rhynhart said in a statement. “I am committed to restoring trust in our government so that it better serves Philadelphians and provides them with the services they need. I will achieve this by auditing each city department every year, with a focus not only on rooting out fraud but on modernization and best practices to save millions of dollars to put towards the needs of our city.”

Both Krasner and Rhynhart also managed to distinguish themselves in the amount of votes they received in an election where a cold rain threatened to depress a turnout that poll watchers were already projecting to be anemic. Krasner got nearly 150,000 votes, while Rhynhart received nearly 160,000 votes, the most of any candidate on the local ballot.