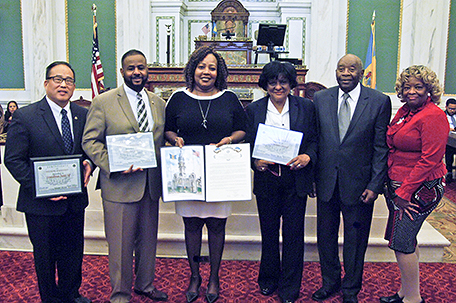 Philadelphia City Council honored the Guardian Civic League for 60 years of doing what it can to improve police/community relations.

While it’s probably never been easy, it really wasn’t easy to be Black and a member of the Philadelphia Police Department in 1956.

The Civil Rights Movement was at it’s early beginnings, Frank Rizzo, a man who would go on to be infamous for what he allowed the Philadelphia Police Department to do in the city’s Black community, was the Chief of Police.

Officer Alphonso Deal felt that something needed to be done to create a space where Black officers can do their jobs and better connect with their communities. The Guardian Civic League was that space, said City Councilman Curtis Jones.

“For Blacks in Blue, it wasn’t easy,” he said. “These officers were trying to make sure that their communities got real justice, not just-us.”

Over the last 60 years, the Guardian Civic League has tried to be a bridge between the community and the police force.

A chapter of the National Black Police Association, the organization works to keep everyone from young people at risk of going down the wrong road in their lives to police officers beginning their careers on the straight and narrow.

During Thursday’s Philadelphia City Council meeting, the governmental body honored the Guardian Civic League with a proclamation that spotlighted the group’s work.

Among the ways that the Guardian Civic League has managed to stay relevant over the years is through a boot camp program that take at-risk youth through the stages of the criminal justice system. The program takes the students through a variety of places including the trauma center at Temple University Hospital and one of the city’s prisons.

But while the organization tries to keep at-risk youth out of the system by scaring them straight, it also tries to help police officers out of trouble through the Steered Straight program. As part of their Philadelphia Police Academy training, the Guardian Civic League sits down with rookie police officers to give them the information and training they need to stay out of the kind of situations that can derail your career, Bilal said.

During the City Council Session, The Guardian Civic League gave honorary memberships to Jones, City Councilwoman Jannie Blackwell, and City Councilman David Oh to thank them for their longtime support of the organization.