The Jury Is Out 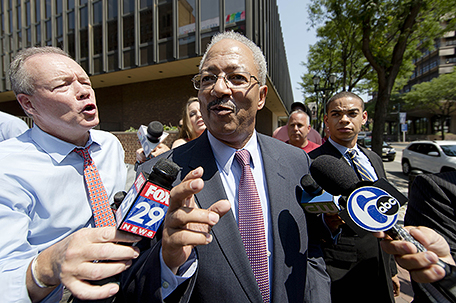 On Wednesday, the fate of Congressman Chaka Fattah was placed in the hands of 12 of his peers.

After five weeks, dozens of witnesses and thousands of pieces of documents, cancelled checks and other pieces of evidence on both sides of the scale, the case of U.S. vs Chaka Fattah et al was given to the jury on Wednesday.

Closing arguments in the case of U.S. Rep. Chaka Fattah and four co-defendants were held on Monday and Tuesday in Judge Henry Bartle III’s courtroom at the James Boyle Federal Courthouse on Market Street.

For two days, attorneys on both sides played to a full house and the only audience that really matters now: the jury.

Department of Justice attorney Jonathan Kravis began the closing arguments for the government. Saying that Fattah and company had gone on a “white collar crime spree” that included using funds set aside for campaign expenses, education conferences and science classes to pay for illegal loans, college tuition and vacation homes in the Poconos.

In other words, he got by with a little help from his friends.

“Congressman Fattah couldn’t have accomplished these schemes without their help,” Kravis said, pointing to defendant’s table. “No one stood up and said No! They all benefitted from their relationship with Congressman Fattah.”

“Follow the money,” Kravis continued. “Use your common sense.”

Much of the case centered on an illegal $1 million loan that Fattah took out during his 2007 Mayoral Campaign from former Sallie Mae CEO Al Lord, who testified in the case under a grant of immunity.

But while he implored the jury to convict the whole group, Kravis put a lot of his focus on Vederman, a former Deputy Mayor for Ed Rendell. Describing him as “Fattah’s ATM”, Kravis told the jury that when the lobbyist helped Fattah by paying tuition for his au pair, and buying a car on paper so that he could pay the closing costs on his vacation home, he was hoping to turn his friendship into a ambassadorship.

“Dollar by dollar, he basically bought himself a Congressman,” Kravis said.

Much of the Government’s case rested on the testimony of two longtime Fattah associates: political consultants Thomas Lindenfeld and Gregory Naylor. The two men have pled guilty to their roles in the conspiracy, which included being the direct recipients of the so-called Lord loan.

Because these men are now technically felons, Fattah’s attorney, Samuel Silver, said that the jury should take their word with a huge grain of salt by the jury.

“What isn’t here and does not exist is evidence of Congressman Fattah committing a crime,” Silver said. “Lindenfeld and Naylor took pleas to felonies and agreed to testify against him and their testimony is the only thing connecting [Fattah] to these crimes. This was presented as a bunch of schemes and a mish-mash of other crimes, but I call it a smear. You should send the prosecution home empty handed.”

Attorneys played to a full house that included U.S. Attorney Zane David Memeger and Fattah’s wife, former NBC-10 anchor Renee Chenault-Fattah. In fact, so many people came to see the opening day of closing arguments on Monday that another courtroom had to be opened to handle the overflow.