The Indignity Of It All 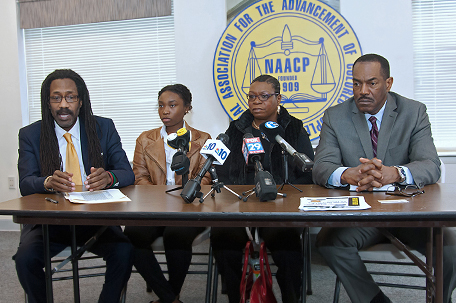 Before Nicol Newman was arrested, the social worker for the City of Philadelphia believed in the helpfulness of the Philadelphia Police. After her arrest, Newman isn’t so sure.

Most of us wouldn’t spend our birthday discussing how we were allegedly manhandled by police and arrested on charges of disorderly conduct.

But that was how Nicol Newman spent part of her’s on Wednesday.

Flanked by her attorney Michael Coard, Philadelphia NAACP President Min. Rodney Muhammad, and her 15-year-old daughter Cheyney, Newman, 48, sat behind a bank of microphones at the Women’s Christian Alliance building in North Philadelphia.

As a social worker for the city’s Department of Human Services, Newman was used to dealing with the police in service to her clients. But after being dragged out of her home in handcuffs, she understands why some of the people she works with may have issues with law enforcement.

“It was insane,” Newman said, dabbing away tears. “I had to ask myself if I had done something wrong although I know that I didn’t. I’ve never had a problem with the police. I’ve worked with the police. I’ve had the utmost respect for their position. And to go to your door [with the police outside], your mindset has to change in an instant because now they’re snatching you out of the house and they’re a threat to you.”

“I was treated like I robbed a bank,” Newman continued. “Being snatched out of my house in front of my neighbors was demeaning and disrespectful.”

Newman’s feelings of threat at the hands of police were the reason why Coard and Muhammad got involved in her case.

The goal is to nip injustices like this in the bud.

“I have confidence in our current police Commissioner Richard Ross, that he’s dedicated to community policing,” Muhammad said. “However, I do feel that there are remaining elements within our Philadelphia police department that tend to look on the lives of people of color with lesser value and worth. And too often, that kind of mindset that criminalizes a social group, rather than serving as protectors, they come instead as predators. She should not have experienced what she experienced.”

According to Coard, how Newman went from enjoying an afternoon at home to this press conference started with a knock on her door.

On March 9, at around noon, Newman had just come home from a doctor’s appointment, had just let her dog out to run around, and was getting a glass of water when a group of police officers came to her house with a warrant for her son’s arrest, Coard said.

“She told them that he wasn’t home and she didn’t let them in,” Coard said. “She asked to see the warrant, and the cops grabbed her and pulled her out of the house.”

Once she was arrested, Newman had to endure a night in jail, something that could cause permanent problems for a woman with health issues, Coard said.

Especially since jails aren’t known for their humane conditions.

“She is a sickly woman,” Coard said. “And because she’s sickly, she’s really sensitive to pain and hard surfaces, the kind of things that you and I might go through and not even notice it. You and I could lean against the wall, or even lay on the ground, and not even notice it. But because of her condition, she can’t do that. So you’ve got this damn near 50-year-old woman getting arrested, getting handcuffed, being taken to the police station, and now she’s in a regular cell, with regular “criminals”. And you’ve got that hard floor and no place to lay…She had to make a bed to lay on.”

On Thursday, Newman had a court hearing about her disorderly conduct charge, something she intends to fight in court, Coard said.

Reward Increased to $75,000 in Abduction Case

“This is a line that was crossed…”