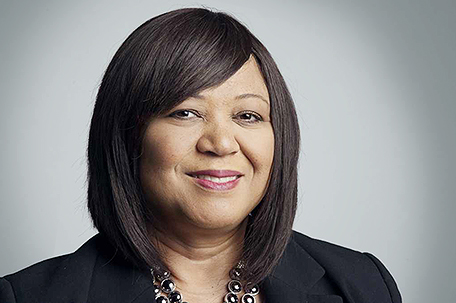 As WHYY’s new Vice President for News and Civic Engagement, Sandra Clark hopes to get public media more connected to the public itself.

When you mention WHYY to most people, the first picture that forms in their head is that of Big Bird, the iconic character from “Sesame Street”.

Sandra Clark, the new Vice President for News and Civic Dialogue at the public radio network, wants the residents of the Delaware Valley to know that the network, which includes both WHYY-TV and 91FM WHYY radio, is more than just a place where Muppets hang out.

She wants the network, and by extension WHYY, to be seen as a place where information is exchanged and dialogue is encouraged.

“When you ask me what ‘civic dialogue’ means to me, it’s not a narrow definition,” Clark said. “To me, it’s the opportunity to convene a group of people to talk about any number of things. It’s about sharing information, and widening our knowledge by sharing information. That’s not something we do nearly enough. So the idea of bringing people together to problem solve is a good one to me.”

Before taking the post in August 2016, Clark was managing editor in charge of Arts and Style at Philadelphia Media Network, publishers of the Philadelphia Inquirer and the Philadelphia Daily News. During her tenure, the department was awarded the 2014 Pulitizer Prize for criticism.

Clark is also credited with implementing “My Daughter’s Kitchen”, an afterschool nutritional cooking program active in 15 area schools, and the multimedia project “Black History: What I Wish I Knew”.

In 1990, Clark briefly left the news business to work with the Peace Corps in Guinea-Bissau and Cape Verde as a volunteer, consultant and trainer and for Africare as an acting country representative in Mozambique. She has also served as a curriculum consultant for Foundations, Inc., and as an adviser for the Arcadia University student blog.

Clark also serves on the boards of the Associated Press Media Editors, the Pennsylvania Associated Press Managing Editors, and the William Allen White School of Journalism at the University of Kansas, where she earned her B.S. in Journalism. (She was recruited to join the Inquirer there by the late Pulitzer Prize winning journalist Acel Moore.) Clark also has an M.B.A. from the Arcadia University School of Global Business.

In an interview with the SUN, Clark talks about her vision for WHYY, the voices she hopes to bring into the station, and the ways she hopes to introduce the public of Philadelphia to it’s largest public media outlet.

SUN: Thanks so much for your time today, Ms. Clark. Congratulations on your new job. What made you decide to take it on?

SC: When the job became open, someone emailed it to me and asked me to spread the word to anyone who might be interested. At the time, I was managing editor at the Inquirer and didn’t really look at the job description.

Then, I began thinking of myself and what I might want in terms of my career. I had been at the Inquirer for a long time; my entire career except for a six-year break living overseas. I wanted to have a bigger voice, more of an opportunity to make an impact, so I looked at the job description. It all spoke to me.

SUN: How did it speak to you?

SC: This job puts me much closer to the audience than I had a chance to be at the Inquirer. You produce sections everyday, but you don’t get to meet your audience. As Vice President of News and Civic Dialogue, I get to talk to members of the community when they use our meeting space and the chance to interact with all different types of people.

I’m especially impressed with the pledge volunteers. In this day where there’s so much cynicism about the media, it’s great to see people who believe in what we do so much that they volunteer to raise money for it. It keeps me very grounded in what the mission of public media is.

SUN: The Philadelphia Association of Black Journalists recently participated in a pledge drive at WHYY…

SC: I know! I was so moved to see that. It felt like such a show of support for me. I was really, really moved…

SUN: Which is why I have to ask what might be an obvious question to you. Traditionally, public media in general, and WHYY in particular, hasn’t been known for it’s diversity of staff or content. Is this something you’re going to tackle and if so, what do you think you can do about that?

SC: I absolutely plan to address it. I can say that if I didn’t believe that I could bring change in this area, I wouldn’t have come here. But I’m tired of just hearing about diversity and inclusion, because if we’re serious about it, there’s plenty of talent out there. We’re having a real conversation where we’re looking at data and finding ways to make our newsroom more diverse. You’re going to see some changes in the newsroom and we have a diversity committee that’s really interested in this. There’s a lot of communication and accountability.

In terms of our content, we have Dr. James Peterson’s [professor of Africana Studies at Lehigh University] Remix podcast, which looks at race, culture, politics and how they intersect in real time. We’re also partnering with several news organizations. We’re working with the Re-Entry Project and we recently partnered with 900AM WURD for a Youth Voices project. We heard from students across the city whose voices hadn’t been heard before.

SUN: You’ve said that civic dialogue means bringing people together to talk about a wide variety of issues in the hope of finding solutions to common problems. How do you see this playing out at WHYY?

SC: I think there’s many different ways to do that and we have to look at all the entry points. Social media is one, but I’m interested in going into communities. The doors that we walk through are two-way and interaction is important. We need to meet with members of the community.

SUN: For many of these communities, WHYY equals “Sesame Street”. How do you get beyond that?

SC: I don’t think that people have much of an awareness of everything we do here. I want to go into as many zip codes as possible to give the community a better idea of what we do.

For instance, we have media labs in 27 different schools. We go into schools and teach students how to create content through these media labs. We also go into middle and high schools to work with PSTV (the School District of Philadelphia’s television station) to broadcast student’s work. We also had a Youth Media Awards Night here recently where we shared films from student filmmakers and many different voices were represented. But we need to have more interaction with the community. I haven’t been to a civic dialogue event yet where I haven’t learned more about how people live and have drawn on those experiences to create better coverage of those areas. It’s not our job to tell anyone how to think, but we can provide a forum for deeper engagement with each other.

SUN: One of the things that kind of stood out to me when I looked at your bio was the fact that you have an M.B.A. from Arcadia University’s School of Global Business. That’s not something that journalists that don’t cover business usually have. What made you decide to do that?

SC: When I was at the Inquirer, I took at look at the [journalism] industry and saw that the modern day newspaper editor needs business acumen. You no longer have the option of just being an editor and assigning stories. I became a lot more interested in working in the business side of journalism. I began looking at the company as a whole, not just the newsroom. [The M.B.A.] also gave me flexibility in terms of my career path. I thought I might find my self on a more global career path managing a development office overseas.

SUN: Is there something that you’re able to use as part of your new job?

SC: While I don’t handle the business side, it allows me to intersect with the entire company. While I have oversight of news operation in all platforms, It also gives me insight into the marketing, underwriting and the other aspects of the business that are a part of my job.

SUN: Again, I thank you so much for your time, Ms. Clark.