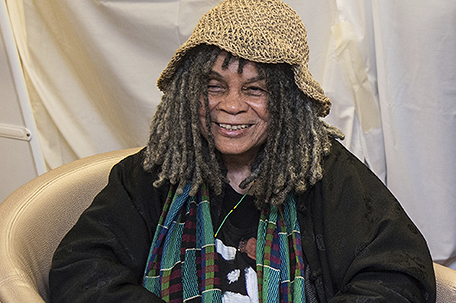 ABOVE PHOTO: Sonia Sanchez appears on board the Norwegian Escape during day 1 of the Summit at Sea cruise in Miami.  (Photo by Amy Harris/Invision/AP, File)

Multitalented wordsmith Sonia Sanchez is the winner of this year’s Dorothy and Lillian Gish Prize.

Right now, a combination of political differences, a lack of human interaction, and too much social media has made it tough for Americans to see the humanity in each other.

For artists like Sonia Sanchez, this presents a challenge. At the heart of Sanchez’s work is seeing what connects us as human beings.

“My work asks the question, ‘What does it mean to be human?’”, she said. “How do we connect as people? This is the most important question facing us as a country.”

And for continuing to try and find the answer to that question at a time when we’re still dealing with a global pandemic, and an unprecedented, sometimes deadly backlash to the forward movement of people of color, Sanchez has been awarded the 28th annual Dorothy and Lillian Gish Prize.

The prize, which is named for the actresses Lillian and Dorothy Gish, includes a $250,000 award, is given to accomplished literary, visual, and performing artists and arts administrators who have pushed the boundaries of their art form, used their art for social change, and have provided a path for the next generations of artists to follow.

For years, Sanchez has done all three. The award-winning poet, and dramatist served as Philadelphia’s poet laureate and as the Laura Carnell Chair in English at Temple University. She was also Temple’s first Presidential Fellow.

Her body of work and continued commitment to change in America made Sanchez the obvious choice for this year’s award, said Zeyba Rahman, senior program officer of the Building Bridges Program of the Doris Duke Foundation for Islamic Art, as well as chair of this year’s Gish Prize selection committee.

“The selection committee unanimously and enthusiastically chose to present this year’s Gish Prize to Sonia Sanchez,” Rahman said. “She is an innovator on the page, an electric presence in performance, a mind-expanding mentor in the classroom, and a resolute, indefatigable force on the frontlines of change. She is the embodiment of the qualities that the Gish Prize celebrates.”

Sanchez was presented her Gish prize at a ceremony held earlier this month, and continues to share her art. In addition to participating in the Student Nonviolent Coordinating Committee’s 60th Anniversary conference in October, she also performed with jazz musician Christian McBride in his piece, “The Movement Revisited,” reciting the words of Rosa Parks.

Sanchez also went to Washington, D.C. to show her support for the students striking for better conditions at Howard University before the Historically Black College agreed to meet their demands.

As long as the question “What does it mean to be human?” continues to be asked, Sanchez intends to do her best to try and answer it.

The human touch: Handcrafted items speak to the soul with unique, customized appeal