The history behind ‘her’ story: Some of Philadelphia’s extraordinary women 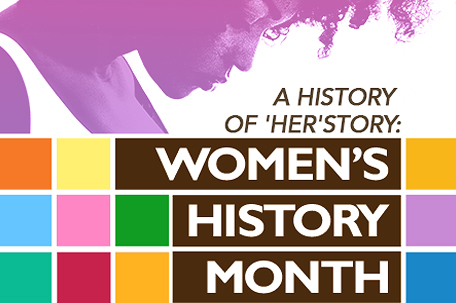 The Law Library of Congress has compiled guides to commemorative observations, including a comprehensive inventory of the Public Laws, Presidential Proclamations and congressional resolutions related to Women’s History Month.

•  National Endowment for the Humanities: https://edsitement.neh.gov/feature/women-in-war

This week we take a look at some of Philadelphia’s extraordinary women and their contributions to their communities and the nation.

1930: Marian then obtained a scholarship through the National Association of Negro Musicians to study in Britain, kicking off a highly successful international career.

1939: Anderson’s manager Sol Hurok attempts to rent Washington, D.C.’s segregated Constitutional Hall, which was owned by the Daughters of the American Revolution (DAR), in spite of a 1935 clause instituted by the venue which stated that they supported “concerts by white artists only.” Hurok’s request was vehemently denied. First Lady Eleanor Roosevelt resigned from the DAR amidst national outrage in protest. It was her intervention — along with that of Hurok and the NAACP’S Walter White — that encouraged Secretary of the Interior Harold Ickes to arrange a free open-air concert on the steps of the Lincoln Memorial on April 9, which was Easter Sunday that year. The concert drew 75,000 attendees and was broadcast to millions via radio.

1941: After receiving the Bok Award, presented annually to an outstanding Philadelphia citizen, Anderson establishes the Marian Anderson Scholarships with the $10,000 prize money.

1955: Anderson debuts at the New York Metropolitan Opera as Ulricia in Guiseppe Verdi’s “un ballo in maschera” (The Masked Ball) – the first African-American performer to do so, at the age of 58 – the only time she participated in an opera role onstage.

1957: Anderson tours India and the Far East as a goodwill ambassador on behalf of the U.S. State Department and the American National Theater and Academy, and is appointed as a delegate to the United Nations Human Rights Committee by President Dwight Eisenhower.

1963: Anderson performs at the iconic March on Washington for Jobs and Freedom. That same year,  President Lyndon Johnson presents Anderson with the American Medal of Freedom.

1965: After a year-long farewell tour, Anderson presents her final concert at Carnegie Hall.

1980: The U.S. Treasury Department coins a half-ounce gold commemorative medal with her likeness.

1982: Clayton — a Girls High School graduate — becomes the first woman and first African-American elected to serve as Philadelphia school superintendent, a position she held until 1993.

1992: The Constance E. Clayton Professorship in Urban Education is established at the University of Pennsylvania Graduate School of Education, making Clayton the first African-American woman to have a professorship named for her at an Ivy League institution.

2019: Clayton — a lifelong supporter of the arts and a member of the Philadelphia Museum of Art’s board of trustees — donates 78 works to the Pennsylvania Academy of the Fine Arts, including pieces by Romare Bearden, former PAFA faculty and alumni like Henry O. Tanner, Laura Wheeler Waring, and others.

1985-2005: After earning a Bachelor of Science degree in elementary education and teaching from Central State University and working as a New Jersey public school teacher, Hendley begins her broadcast career at CBS 3 TV in Philadelphia, where she serves as an Eyewitness News education reporter, producer/host of “City Lights”, an award-winning weekend primetime magazine show, and as director of public affairs.

2002: Hendley receives an Emmy award for a feature segment on Black History.

2019: Hendley serves as a volunteer jazz curator for a monthly Jazz Salon.

1981: Ralph begins playing the iconic role of Deena Jones in the Broadway musical “Dreamgirls,” eventually receiving a Tony Award nomination for “Best Actress in a Musical.”

1996: The popular UPN sitcom, “Moesha”, premieres with R&B singer Brandy Norwood in the title role of Moesha Mitchell, and Ralph playing the role as her stepmother, Deirdre “Dee” Mitchell.

2017: Ralph becomes the first African-American actor to play Madame Morrible in “Wicked” at the Gershwin.

2018: Ralph returns to television in the CBS series “Fam.”

2010: Jeter graduates from Spelman College and focuses on growing her company, AOI Events & PR — which she founded in her senior year. Jeter also starts an internship and mentoring program Pipeline for high school students interested in a media-related career

2013: Jeter launches Women in Media Global Network (WIM Global), an organization that supports women who are currently in the media and communications industry, as well as those who aspire to enter it.

2014: Jeter is named the African American Chamber of Commerce of PA, NJ, & DE’s “Young Professional of the Year”

2015: Jeter is named one of the “Top 10 People Under 40 to Watch in Philadelphia” by the Philadelphia Tribune

2018: Jeter is appointed to the Governor’s Commission on African-American Affairs by Pennsylvania Governor Tom Wolf.

1808: While working as a teacher at a Quaker boarding school near Poughkeepsie, New York, Mott learned that she was paid only half the salary her male colleagues received, launching a lifelong commitment to women’s rights issues.

1824: Mott is accepted as a minister of the Religious Society of Friends.

1848: Mott and fellow activist Elizabeth Cady Stanton call a convention in Seneca Falls, New York to discuss the “social, civil, and religious rights of women.” A “Declaration of Sentiments” modeled on the Declaration of Independence is issued at the gathering, stating that “all men and women are created equal.”

1850: Mott and her husband James open their home to enslaved people seeking freedom via the Underground Railroad.

1880: Mott’s last address is given to the Friends’ annual meeting in May

1996: Staley wins a gold medal at the Summer Olympics, the first of three earned throughout her career, then begins her professional career in the American Basketball League and the WNBA. Staley also earns two FIBA World Championship gold medals, one bronze medal and seven international invitational titles from 1989 to 2004.

1997: Staley launches the Dawn Staley Foundation, which sponsors an after-school program at the Hank Gathers Recreation Center. In 2017, she presents a replica NCAA National Championship trophy to the center. The City also renames the street in front of the center in her honor that same year.

2004: Staley is elected to carry the United States flag at the opening ceremony for the Summer Olympics.

1965: Participates in the March in Selma, Alabama alongside the Rev. Dr. Martin Luther King, Jr.

1971: Tucker becomes the first African American Secretary of State in the nation.

1991: Tucker founds the Bethune-DuBois Institute, Inc. in order to promote the cultural development of African American youth through scholarships and educational programs

1990s: Tucker becomes an outspoken critic of misogynistic, demeaning and violent “gangsta rap” lyrics, sparking virulent pushback from the industry and performers such as the late Tupac Shakur, Eminem, and ‘Lil Kim, among others

2006: It is announced that the North Building in Harrisburg, which is adjacent to the State Capitol Building, is to be renamed the Secretary C. Delores Tucker Building.